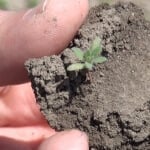 Weed resistance has been a hot topic in Canada for the past number of years, with glyphosate resistance moving front and centre in the last year or two. In case you hadn’t heard, glyphosate-resistant kochia was confirmed in Alberta in early 2012 and, as of 2013, it’s been confirmed in south and west central Saskatchewan as well.

It’s not really surprising that kochia is the first weed to develop Group 9 resistance —  Hugh Beckie, research scientist with AAFC, and his colleagues predicted this some time ago. The interesting thing about kochia’s resistance to glyphosate is it developed. I have had the opportunity to listen to Bob Blackshaw, weed scientist with AAFC, talk on the subject and he stated that all signs point to gene amplification as the means by which kochia has developed resistance. Simply put, just like you and me, all weeds are genetically unique — some of us can consume only two beers and stay upright, while others can consume eight, for example. Weeds are the same, there may be that one weed out of the million that can tolerate glyphosate and set seed, while the rest die. If this one plant sets seed then many of the seeds it produces will be resistant as well. Soon you are left with only the resistant weeds in your field, and since kochia seeds are only viable in the soil for about two years you can get roughly 85% of them germinating that next spring, meaning the resistance can get out of hand fast! This mechanism of resistance is different than the way kochia develops resistance to Group 2s, for example, which is through target site mutation, essentially meaning the plant adapts to tolerate the herbicide (Roughly 90% of resistance is through this mechanism).

With roughly ninety million litres of glyphosate applied in Western Canada in 2012, it’s safe to say glyphosate is important and must be conserved as a useful weed killer. What can farmers do to maintain its effectiveness and value? Adding products from Groups 4 or 14 into your pre-burn (i.e. BASF’s Heat or 2,4-D), is a great way to help lower glyphosate resistance risk. Utilizing pre-emerge Group 3 and 14 products, such as Dow’s Edge and Nufarm’s Authority is also very helpful, especially considering the active ingredient in Authority is one of the strongest out there on kochia. Also, take advantage of cereal herbicides with more than one active and ideally more than one group to help fight kochia. Canada has not confirmed any Group 4 resistance yet, but there has been fluroxypyr (Octtain, Trophy, Barricade) resistant kochia in the northern U.S. states, which, along with dicamba (which also has confirmed kochia resistance in the USA) have some of the best activity on kochia.

Bob Blackshaw sayst that kochia resistance was likely around for two to five years before being confirmed. This means your farm may have it, or you could have glyphosate resistance lurking in weed populations of wild oat, cleavers or green foxtail, three of the weeds hypothesized to develop glyphosate resistance next.

The bottom line is that farmers must be proactive and not reactive when it comes to glyphosate resistance. The extra few bucks an acre to tank-mix may seem like a lot now, but full blown resistance is going to cost you more in the long run.

Corn School: Should You Plant a ‘Fixed’ or a ‘Flex’ Hybrid?

Soybean School: The risk and rewards of early planted soybeans