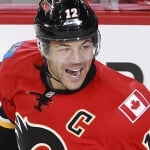 A historic moment transpired last night. The Calgary Flames traded its leading scorer, captain and legendary player, Jarome Iginla, to the Pittsburgh Penguins for two marginal prospects and a late first-round draft pick in the 2013 entry.

Long-time Calgary Flames fans are disappointed with the return for their greatest hero. Much of the sports media is critical of the Calgary Flames for not making this decision two years ago when the team could of got much more in return, especially when the outlook for the team having success in the short term was just as bleak as today.

Last night, as I watched TSN and Sportsnet  and heard the list of rumoured Iginla deals to Boston or Pittsburgh or L.A. or Chicago, I immediately drew comparisons to similar farm management decisions involving farm machinery.

Many of you struggle with these same types of asset decisions.  Do we trade the four wheel drive with five seasons and high hours or do we just run it into the ground? Do we flip our two combines every year? Could we find a good used baler as a back up in case we have some rainy weather during hay season. These types of questions are no different than the ones a professional sports GM must answer when dealing with player asset decisions.

Farmers must manage the life span of assets and ensure that all tractors, planters, seeders, sprayers and combines are in good condition, well maintained and replaced in a timely manner to maximize trade-in value or used effectively until all useful life of the asset has been exhausted. Many of you know that if you just put that “one last” season on a combine you are one breakdown or issue away from significant deterioration of trade value. At a certain point it makes sense to run a piece of farm equipment until its death because you will get nothing in trade return anyways. The phrase “it doesn’t owe us anything” has been said on many farms across the U.S. and Canada.

The Calgary Flames ran its best tractor too long. The Flames tried to get just one last crop out of its favorite tractor and then tried to trade this favorite tractor at the last minute, resulting in very little in return. The Calgary Flames couldn’t make a decision on Iginla when many thought they should of, resulting in this caught-in-the-middle outcome of limited return.

Just like players, trying to trade or sell farm assets requires timing and favorable circumstance to ensure maximum value. In this case the Calgary Flames had neither.