Editor’s note: This is Owen Roberts’ Real Talk, Real Action column. Each week, Owen will offer his insight into how farmers and the agricultural industry can participate in the rural- and ag-related discussions going on around them. Contact Owen at [email protected] or on Twitter at @TheUrbanCowboy. 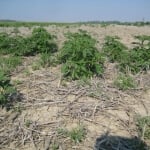 What’s spreading faster in Canada — herbicide-resistant weeds, or growers who are aware of them?

That’s one of the questions raised by the results of a herbicide resistance poll involving 500 eastern and western Canada farmers. It was conducted by Ipsos Reid on behalf of BASF Canada Inc.

The poll showed more Canadian farmers (63 per cent, up seven points from last poll) believe weeds in their fields are getting tougher to control.

As well, more farmers (43 per cent, up six points) suspect they have weeds, such as kochia, Canada fleabane and common and giant ragweed, that are resistant to herbicides.

That realization is encouraging to Joel Johnson, BASF Brand Manager for Western Herbicides.On the control side, nearly half say they know glyphosate alone is no longer an effective weed treatment. They know single modes of action – even effective ones, such as glyphosate – promote resistance.

“The needle is moving,” he says. “Resistance is an issue and it is not going away. More and more growers are becoming aware and their perceptions are changing.

But there’s a problem. The poll showed fewer Canadian growers (67 per cent, down 10 points) “strongly agree” that they are using herbicides from more than one group to manage their weeds. They’re making that wrong turn, even though they know a single mode can lead to resistance.

Advice from sales reps, plant scientists and brand managers such as Johnson is consistent: Rotate your crops and your herbicide chemistry groups, use herbicides with multiple modes of action and use full label use rates whenever possible.

As Johnson says, it’s not too late to address resistance. The time to plan is now.

Corn School: Strip tillage could mean being on a field one to two days sooner

Why dairy farmers should park the planter and harvest forage