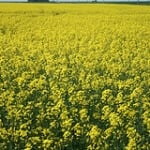 The Edmonton area of Alberta has the unwanted title of “clubroot hotspot,” as this is where the disease first took hold. The incidence map has grown each year since clubroot was confirmed in canola in 2003.  Then, not long ago, viable spores were detected in Saskatchewan soils. Last week, the Manitoba government confirmed viable spores were found in that province, too.

The Canola Council of Canada has produced an incredible video that details the disease life cycle and offers and in-depth look at how the disease spreads. Once spores are in the soil, they will stay for an incredibly long period of time. The best defense to this disease is minimizing the spread combined with using resistant varieties. The tough part is that there’s no sure way to anticipate if you’ve got spores, and sanitizing machines “just in case” can seem too time consuming.

Which brings us to our latest poll — Will you manage for clubroot this year? How?

Seeding Update is Not Pretty