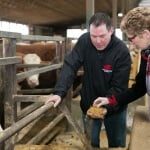 It was high noon in steamy Windsor, Ont., when the Ontario Corn-Fed Beef Program was launched at a lunchtime steak BBQ back in the summer of 2001. Given the heat, you could have grilled the corn-fed beef directly on the strip mall parking lot where the sweltering event was staged, and skipped the middleman – the BBQ — altogether.

Things were much different Tuesday, for the latest announcement about the program – a $10-million stabilization fund designed to help stimulate corn-fed beef production and encourage participation by more producers.

What’s different? Well, for one, the venue was much more rural, and cooler. Mike and Jen Conlin’s beef farm near Lucan served a backdrop for the announcement, with dignitaries bundled up against the last vestiges of Ontario’s winter.

But besides the weather, there were other big differences, beginning with the program’s growth. Back at the 2001 launch, program organizers were wringing their hands about whether it would catch on. But it’s developed into the largest producer-owned beef brand in Ontario. Corn-fed beef is now featured in more than 240 Loblaw Co. and affiliate stores, and 120 other retail outlets across Ontario.

That popularity’s not lost on savvy politicians such as Ontario Premier and agriculture and food minister Kathleen Wynne, a local-food champion who’s done more to reach out to rural Ontario than any urban politician in recent memory.

Given the premier’s zeal to get a local food act passed soon in Ontario, it was no surprise to see her in photographers’ sights at the Conlin farm. And from my perch, her take on why the stabilization fund was created was right on the money.

“Ontario Corn-Fed Beef is a model of the way forward,” she said, “helping producers market their products based on where, or how, they are made.”

Ontario’s beef sector needs this program. The government, and the industry, delivered.