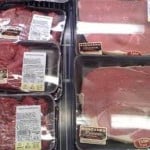 A WTO ruling from late in 2011 sided with Canada, among other countries, that U.S. Country of Origin Labeling  (COOL) regulation was “inconsistent with its WTO trade obligations.” But instead of amending the labeling requirements in time for the late may deadline, the US has seemingly upped the ante, and will now being to add where an animal is born, raised and slaughtered to packaging, adding excessive cost to an already laborious system.

Canadian Agriculture Minister Gerry Ritz stated: “Our Government is extremely disappointed with the proposed regulatory changes put forward by the United States today with respect to Country of Origin Labelling. We do not believe that the proposed changes will bring the United States into compliance with its WTO obligations. The proposed changes will increase the discrimination against exports of cattle and hogs from Canada and increase damages to Canadian industry.

“Our Government will consider all options, including retaliatory measures, should the U.S. not achieve compliance by May 23, 2013, as mandated by the WTO. We will continue to stand with Canadian cattle and hog producers against unfair Country of Origin Labeling in the U.S.”

Full details regarding the US changes to comply with the WTO ruling are expected in early April.

Grower groups warn against use of lambda-cy in ’23