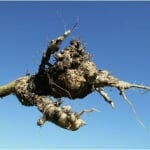 It was only a matter of time before clubroot infection or viable clubroot spores were found in Manitoba soil, still it’s not welcome news.

Proper equipment sanitization, especially removal of soil from field equipment, is the most important factor for preventing the spread of soil-borne disease.  The use of disease-resistant varieties when growing canola, proper crop rotation and good weed management of alternate hosts will decrease the likelihood of a soil-borne disease infesting a field.  These practices will also help prevent heavier infestations from developing within a field where a disease may already be present at undetected levels.

In the 2012 canola disease survey, no clubroot disease symptoms were seen in any of the canola fields surveyed across Manitoba.  However, soil samples taken from six unrelated fields have been confirmed through polymerase chain reaction (PCR) analysis to contain clubroot DNA.  Further tests done under ideal greenhouse conditions indicate that two of the six soil samples produced weak clubroot gall symptoms on highly susceptible plants.  These test results are considered positive cases of clubroot, with viable spores able to produce disease.  Positive results in the PCR test only are considered ‘non-symptomatic fields of concern’.  In 2011, two soil samples were identified as non-symptomatic fields of concern, but retesting in spring 2012 resulted in negative PCR results.  All fields previously identified will be monitored, with additional soil samples tested in 2013.

More information is available online at www.gov.mb.ca/agriculture/crops/diseases/fac72s00.html or by contacting MAFRI’s Crops Knowledge Centre at 204-745-5630