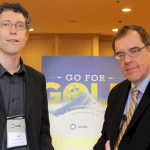 Canada is no longer an Atlantic nation, it is a Pacific nation, and we’re all better off if we keep that in mind when it comes to trade, policy and politics. That’s according to John Ibbitson, Globe & Mail Ottawa bureau chief, and guest speaker at last week’s Canola Council of Canada convention held at Vancover, B.C.

Ibbitson is co-author of the recently published “The Big Shift,” a book that outlines why he and co-author Darrell Bricker believe Canada’s political clout has shifted west for the foreseeable future. No longer a country ruled by Ontario and Quebec’s agenda, Ibbitson says that it’s our immigrant populations from China and other Pacific nations — regardless of where they settle here — that have tipped the balance of power to the west.

In this video, Jay Whetter, with the Canola Council of Canada, talks with Ibbitson about his thoughts on how Canada makes the most of this “big shift,” and asks him to elaborate on what he means by Canada being the first “post-national” country.

Agritechnica still set to go in 2021, but without John Deere