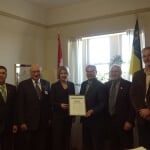 The Barley Council of Canada (BCC) was formally incorporated today, according to a press release. The first of its kind in Canada, the council will speak on behalf of barley industry members and farmers.

“This is the first time in history the entire value chain has been brought together from coast to coast on a board of directors,” Brian Otto, BCC chairman, said in a release. “We are proud to move forward as the national voice for barley.”

“On behalf of the Government of Canada, I want to congratulate the new Barley Council of Canada on its incorporation,” said Federal Agriculture Minister Gerry Ritz. “We look forward to working with the BCC to grow a bright future for Canada’s hardworking barley farmers.”

The newly established Council is eager to move forward with project initiatives and is currently finalizing its funding model.

The BCC’s Board of Directors was elected on February 28, 2013

Kara Oosterhuis is back for another summer of adventure with RealAgriculture

A few hundred people, passionate about Canadian agriculture, gathered in Ottawa this week for the Grow Canada conference. This event is always one of the highlights of the year, as it brings together several industry groups, farm groups, government department reps, and stakeholders, under a positive vision for forging a path forward. I was fortunate…