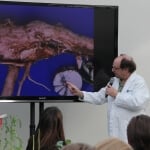 Sclerotinia gets so much attention, you’d think it was the only disease canola succumbed to. While there are many reasons to brush up on sclerotinia management, doing so at the expense of watching and managing for blackleg is a recipe for a slow-building disaster. While canola varieties do have resistance to several strains of the disease, the incidence of strains outside this resistance range are occurring. Because blackleg needs canola residue to survive on, even a one in three year rotation can still build up disease levels.

Blackleg identification can be done at the seeding stage (see image below), however, most farmers will likely be more familiar with the later-season lesions on leaves and stems. In this video filmed at CanoLAB ’13 at Edmonton, Ralph Lange, of Alberta Innovates, walks through the most common symptoms of blackleg, how to tell blackleg from root rots and other diseases and runs through key management decisions farmers need to make in order to get a handle on the resurgence of this disease.

How the seed sector can better meet the needs of producers

Wheat School: The key to planting in dry soils

Whatever you do, get out there and plant your wheat. That's the message agronomist Peter Johnson has for Ontario wheat growers in this episode of the Wheat School. "Either plant into moisture or plant in dust," says Johnson, who notes that many growers across the province are hesitant to plant because of widespread dry soil conditions.…