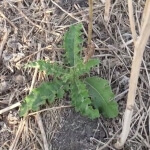 You may have heard once or twice the terms “C3” or “C4” plants. Generally speaking, most of our crops and plants in Western Canada are C3. C3 plants are usually what you see growing in our fields, including wheat, canola, lentils, peas and barley. These plants are known as cool season crops and will yield better when the extremely hot temperatures (>27 degrees C) stay away during the growing season. C4 crops, which for us  means corn and some pasture grass species, prefers warmer temperatures and a warmer growing season. They also can tolerate drought much better.

To put it simply, the difference between C3 and C4 plants it is a difference in photosynthetic and carbon fixing capabilities leading to some variations in nitrogen use efficiency, water use efficiency and heat tolerance, all of which the C4 plants have the advantage in.

I am often told farmers avoid increasing their seeding rate in case of a drought, but guess what? If your crop isn’t competing for that water, you can bet that kochia is going to be there sucking it up instead

Now you are probably saying, so what? What does this mean for my farm?  The reason I wanted to touch on this is because of how our crop types impact weeds. Kochia, millet and red root pigweed are all C4 plants, meaning they prefer warmer, drier conditions and will compete better with your crop under these situations.

I am often told farmers avoid increasing their seeding rate in case of a drought, but guess what? If your crop isn’t competing for that water, you can bet that kochia is going to be there sucking it up instead. Next, understanding what type of weed you are dealing with can help you understand variations in chemical efficacy or even spray timing. Many spray the same herbicide year after year, yet sometimes see different results. Part of this could be that the one year you sprayed when it was 16 degrees C and got average control of your millet, then the next year sprayed when it was 25 degrees C and got exceptional control.

You may also have heard not to spray when temperatures are above 27 degrees C (roughly), but if your main target is a weed like redroot pigweed, it is actually thriving at that point even while your wheat crop is slowing its growth rate down. This isn’t good for crop competition. If you are around that 27 degree C mark, get out and spray. Especially if humidity is still relatively high.

Lastly, as we hear more and more about global warming and increased atmospheric carbon dioxide, many often wonder how this will add or subtract from crop production. Now, there are many theories on exactly what will happen, but one thing seems to be sure, C3 weeds will get stronger. C3 plants are not as efficient at fixing carbon dioxide as C4, so as C02 levels increase, so does a C3 plant’s competition level. But, this doesn’t automatically equate to increased wheat, barley,  or lentil yields, for example. Since C3 weeds are typically more responsive to C02 than our C3 crops it actually means more competitive weeds which could necessitate higher rates of herbicides to get control of these pests. As if controlling Canada thistle wasn’t hard enough, this is one weed that has been shown to be one of the best responders to increased C02 levels.

I remember sitting in my intro botany class thinking about how the difference between C3 and C4 plants wouldn’t ever be useful for me, but as crop production moves forward I believe it is understanding little things like this that will make quite the difference.

Before you know it, the days are going to start getting longer, just as meteorological winter begins! And what does winter really mean? Conference season! In this week's episode of Wheat Pete's Word, host Peter Johnson answers your questions left on the phone line, offers some solid life advice from an astronaut, and shares his…