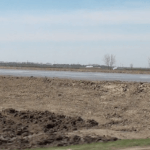 Over 50 farmers gathered near a river diversion yesterday intending to send a message to the Manitoba government. The group of farmers, who farm near Lake Manitoba, were protesting a lack of fair compensation for forced flooding that occurred in 2011. A small group of farmers parked large equipment on the low side of the diversion and when the province said it would still open the floodgates, farmers themselves moved in harm’s way. A court ordered injunction was received late yesterday evening, though the RCMP did not have to serve it out, as farmers agreed to move out of the way near 11 o’clock last night after a promised meeting with the provincial government.

The Portage Diversion, where the protest was staged, was pushed beyond capacity in 2011 to drain water from the Assiniboine River into Lake Manitoba in order to save several communities down river, including Winnipeg. The problem, however, was that there was nowhere for the water to go once it reached the massive lake, so homes, pastures and farmland well out of the lake’s normal reach were swamped with several feet of water. Much of that pasture has not recovered. Farmers have received some compensation, but many are still waiting for the land to come back and be productive. Still more say the compensation is inadequate.

While farmers were told a meeting with the government was forthcoming, no details were made available immediately. No official statement has been released.

Watch this space for updates as they come in.