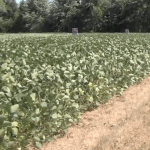 As more Manitoba farmers add soybeans into the crop rotation, it stands to reason that pests that attack the crop will begin showing up as well. Root rots — and there are so very many species that cause this — already exist in prairie soils, but just which species are here and what to do about them is still in the preliminary stages of research.

Debra McLaren, plant pathologist with Agriculture and Agri-Food Canada, presented some recent findings on root rot screening at the Manitoba Special Crops Symposium. In this Soybean School episode, McLaren lists a few of the pest species farmers need to be aware of, as well as gives us an update on what pathogens are on the radar.

McLaren also discusses management and treatment for root rots, but adds that seed treatment is only effective against certain species of root rot and doesn’t protect against late season infection. Varietal resistance is the goal here, however, varieties must be tested for resistance against known pathogens first, thus the research into putting our finger on exactly what lurks below.

Plan for next year — and not last year — when selecting hybrids

If you ask Beef Market Update host, Shaun Haney, what he is seeing and hearing this week at the National Cattlemen's Beef Association conference (NCBA), he will say that despite profitability concerns across the cattle industry, there's an encouraging amount of optimism going on. Also Anne Wasko, of the Gateway Livestock Exchange, is not at…