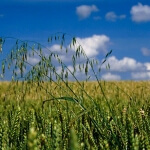 Corn School: The Many Uses of an S-tine Cultivator

Is This The End of the Independent Hog Producer in Western Canada?