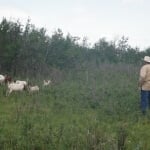 The federal government handed over the more than a million acres of Saskatchewan’s PFRA community pastures to the provincial government last year, a move that some have argued jeopardizes the pastures’ future. Though announced in 2012, the first hand-off of the land is not slated to happen until next grazing season, and all of the pastures will be sold or leased by 2018. The provincial government has made it clear that it will not keep or manage the pastures, nor will the land be auctioned off to the highest bidder. The government made it clear that patrons — current users of the community pastures — will have first right of refusal on the land.

To that end, RealAgriculturel.com asked Harold Martens, president of the Saskatchewan Stock Growers Association, to bring us up to speed on where the land transfer is at, how the patrons are organizing themselves to take over the land and how, if possible, those not currently using the pastures could participate.

Alberta government “getting out of” agriculture research with latest staff cuts: former researcher