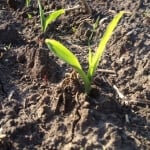 It’s been a rough year for many farmers in the U.S., as drought stole yields, entire crops and whole pastures. A return to more normal precipitation patterns over the winter helped in many areas, however, this spring’s cold and, yes, even snowy April weather has put the brakes on the spring corn planting season and has already impacted winter wheat fields in the south.

The USDA recently released its plantings report and the numbers reflect just how cold and wet the spring has been. While many will welcome the moisture, but the crop will need fantastic weather from here on out to catch back up to even average development.

A snippet of the corn report (all current planting figures are estimates as of April 21, 2013):

Brennan Turner’s FarmLead Marketplace Breakfast Brief from this morning had this to say on the report:

According to a Bloomberg survey of 11 analysts, US farmers will likely abandon 25% of their hard red winter wheat, the most since 2006. Winter wheat accounts for 72% of all US varieties grown and while Informa Economics only expects winter wheat output to drop 3.9%, Societe Generale is more bullish, estimating a 27% drop in total wheat output, sparking a rally in Kansas City wheat by the end of the year to $8.50/bushel. Conversely, some analysts suggest that because the crop is still 2-5 weeks behind normal maturity, and that for the majority of the crop, the cold doesn’t matter too much right now.

As for spring wheat (aka the aforementioned Minneapolis-traded grain), growers only completed 1% of plantings last week (per the USDA). Farmers in North Dakota, easily the biggest spring wheat state, on average, are expecting to begin fieldwork May 5th (they usually have about 35% of the spring wheat crop in by then). The recent precipitation & slow snowmelt bodes well for areas that are still hurting from the drought. That ultimately is bearish as the extra soil moisture will help crops advance back to trendline levels.

Ross stepping down from Agriculture in the Classroom-Canada