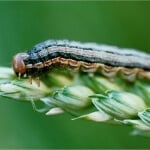 What, indeed. If you just read the title and aren’t sure, the short answer is nothing. The longer answer, however, is that tram lines may make scouting for insects easier and more thorough, and thus beneficial. Not convinced? Read on.

Some insects are predictably found on the edge of the field — like flea beetles, cabbage seedpod weevil, leafhoppers, pea leaf weevil, wheat stem sawfly, wheat midge and grasshoppers. However, access to the center of the fields is important in order to not miss important scouting for other insects, or in cases where even the margin-dwellers have moved in-land.

When would edge-lovers be found in the centre of a field? First, if you are growing the same crop back to back, insects that specialize in that crop will be spread through the crop more uniformly and not as concentrated on the edge. Also edge effects are often most pronounced early in the in-migration phase. Insects will disperse further into the field as time goes on and the edge effect will become less pronounced. We have clearly seen this with cabbage seedpod weevil.

Dispersal deeper into the field is also more pronounced when insect populations are higher. This is particularly true for insects like wheat stem sawfly.
Other insects are more general across the field or in patches in the field that are not necessarily on the edge. Lygus is an example of an insect that we consider as general across the field although experience tells us that there are differences based on the density of the crop. These may be actual differences in insect numbers or they may be differences in the ability to catch more lygus in thin crops with a sweep net.

The real issue of access to the middle of a field is with insects that tend to be patchy and not edge concentrated. This is true for wireworms, cutworms, diamond back moth and bertha armyworm. For the first two, scouting can be done easily with easy access to the centre of fields while the crops are in the seedling and early growth stages. These insects can be watched for while scouting for weeds and spraying, yes, but it is also important to check crops on other occasions as well. Look for areas that are thinner than expected and don’t write them off as just being in poor growth areas.

Bertha armyworm and diamond back moth reach their damaging stage much later times during the season when access becomes more difficult. It may be possible to follow established tram lines to access deeper into the field. Not a tram line fan? It may be good to develop access trails to ride a quad deeper into the field in various spots. The bottom line is that these insects are not likely to be in the same numbers on the edge as in the middle and more complete scouting is needed. Our experience with the bertha armyworm outbreak in central Alberta last year made it clear we need to be able to more completely scout fields when an outbreak occurs.

Tram lines may be one way to access deeper into the field but producers and agrologists should plan how they are going to do proper scouting throughout the field. Plan your work and work your plan.

Golden Horseshoe Crop Update to May 15

Corn School: When to switch to shorter-season hybrids

Scott Meers is insect management specialist with Alberta Agriculture and Rural Development. Find him on Twitter as @ABbugCounter

As weeds evolve, weed science must evolve to keep up. Today's weed scientists work hard to tackle evolving herbicide resistant weeds and offer solutions to keep farmers one step ahead. Eric Johnson, weed scientist with the Agronomic Crop Imaging lab at the University of Saskatchewan, has been working on these solutions for decades through his…