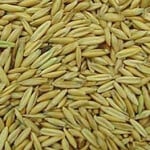 Syngenta Canada Inc. announced today via press release that azoxystrobin has been registered for use on oats in the United States. Azoxystrobin is a key active ingredient in Quilt fungicide. As a result, oats grown in Canada and treated with Quilt can now be exported to the United States.

“This timely U.S. registration gives Canadian growers the freedom and flexibility to apply Quilt on their oats and know that they will be able to export their crop to the U.S.,” Tanya Tocheva, director, regulatory affairs for Syngenta Canada, said in a company release. “As the value of Canadian exports for oats and oat products is approximately $500 million, with about 95 per cent of that destined for the U.S. market,1 the establishment of this MRL is excellent news for Canadian growers.”

Quilt is a broad-spectrum fungicide that has both systemic and curative properties based on its two active ingredients, azoxystrobin (Group 3) and propiconazole (Group 11).

“Quilt is an excellent fit on farm due to its ability to manage a wide spectrum of diseases in cereal and pulse crops,” says Eric Phillips, asset lead for Fungicides and Insecticides for Syngenta Canada. “Oat growers in particular appreciate this fungicide because of its effective control of key quality and yield-robbing oat diseases, including crown rust.”

Crown rust, also known as leaf rust, is a disease caused by the fungus Puccinia coronata var. avenae. This fungus is specific to cultivated oats, wild oats and a few other wild grasses, but will not infect wheat, barley or rye. Crown rust reduces oat yield and causes thin kernels with low test weight — factors that greatly reduce milling quality.

Loss due to disease can reach 100 per cent if infection is early, if it is a susceptible cultivar and if weather conditions are favourable for the development of fungal spores and their spread, according to the Ministry of Agriculture in Saskatchewan.