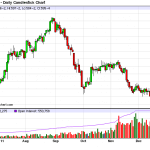 Corn and feedgrain stocks were the only crop types that held or increased volume as of December, 2012. That’s according to Statistics Canada’s ending stocks report released today.

Canola stocks were down over 20% over 2011 ending stocks, barley stocks continued to push downwards, even in the face of higher production in 2012, and oats also trended down nearly 20%. Total soybean stocks, both on-farm and commercial, fell 6.7% over 2011.

Wheat, non-durum, held nearly steady with only a slight decrease in stocks for December, 2012.

For the more on the ending stocks report, click here.

We're starting to see some flowering in canola and with that, scouting for sclerotinia is on the to-do list. Justine Cornelsen, with the Canola Council of Canada, based out of Manitoba, joined Kara Oosterhuis in this latest episode of Canola School. "It comes down to environmental conditions," says Cornelsen, "Do you have enough moisture? Is…