Massive flooding last week in Calgary and High River, Alberta, displaced more than 70,000 people, has ruined homes and infrastructure and even taken lives. Images of homes, roads and bridges destroyed by the water are disturbing, and for those of us far from the mess, can’t help but leave us feeling a little helpless.

I’ve been following along with the flooding news and have been encouraged by the stories of volunteers working night and day, offering help, food, shelter and even a shoulder to cry on. When images of a swamped Stampede Park arose, questions from as far away as Ireland reached my Facebook page. “Would the Stampede still run?” Vern Kimball, CEO of the ‘greatest outdoor show on earth’, says not just yes, but yes, come “hell or high water.”

In keeping with that theme, the Calgary Stampede has launched a t-shirt fundraiser. A portion of the sale of each t-shirt will be donated to the Red Cross’s relief efforts in the city and surrounding areas.

Want to show your support for the Stampede and help Alberta’s flood victims? Purchase your Hell or High Water t-shirt at the Calgary Stampede’s online store by clicking here. 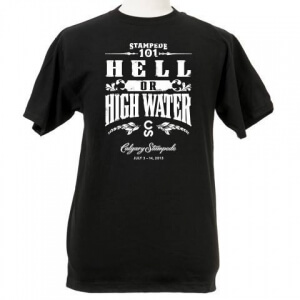 Xtend Soybeans to be Available for ’16 Growing Season

Scott Moe wins race to be Premier of Saskatchewan