I’m likely the only mum of two young kids that you’ll see taking pictures of weed seedlings on the way to the park. I do it for a few reasons. One, I work in farm media, you never know when you’re going to need a really great shot of a lamb’s quarters seedling (trust me, it’s happened more than once). Two, I like plants, and, perhaps more importantly, I like to keep my weed ID skills sharp.

Being a full-time writer and not an agronomist means I’m not in the field as much as I’d like to be, and my education and true passion is agronomy, not words, so whenever I get the chance to head out the door and put my education to work, I jump at it.

Yesterday, I needed two things: extra footage of emerging fields and flea beetle feeding and to get outside, as it was beautiful out. So I headed south of Winnipeg, giant hat and sunscreen in hand, to accomplish both.

As I scouted wheat, soybean, canola and alfalfa fields, I helped my best friend Lynda Raffard take notes on weed types, staging and general observations of the established crop. I’m guessing I won’t be asked back, because apparently when scouting for pests, mallards are not important enough to mark on the list and all-caps comments about wild oat herbicide resistance won’t likely be appreciated (it is Manitoba, after all), but I digress.

Of particular interest, however, we did find this: 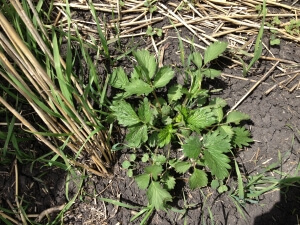 I had to wrack my brain on this one. It reminded me of hemp nettle, but that didn’t sound right. So I took to my Twitterpedia — an amazing resource of the over 3,000 people I follow to provide me with an answer. (Trademarking that word, by the by). What the heck is this thing? It’s large and in charge and growing like, well, a weed. What say you, RealAggies? What is it? (I actually have since got the answer so a free t-shirt to whomever comes up with the correct answer first).

We also found this critter in an establishing alfalfa field.

Exhibit B. I named him Slimey (but he wasn’t). Note: he met an unfortunate end with a rock shortly after this photo was taken. 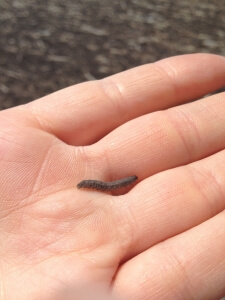 10 points to Gryffindor for getting it right.

2 thoughts on “What Weed is This? Bushy Plant Has Me Stumped”