If you live on the Prairies, chances are you’ve seen numerous thunderstorms develop. You already know they typically form on hot, humid days. This is because thunderstorms require moisture, a force to move that moisture and an unstable air mass to develop.

You’ve also seen the cumulus stage of thunderstorms developing on the horizon, no doubt. As the heated, moist air masses rise and condense. Eventually, the warmed air reaches a height of similar temperatures, and can no longer rise. Instead, it spreads out, giving a thunderstorm it’s characteristic anvil-shape.

Cumulonimbus clouds can reach incredible heights, and with strong enough updrafts, can cause severe weather, including hail. Hail is a four-letter word for all farmers — its impact can be absolute and cause complete crop failure. The Prairies were hit hard with hail damage last year, with storms continuing into September, ravaging crops only days before they were harvested. Insurance agencies were overwhelmed with claims.

Well, it seems the severe weather continues this year, as reports of thousands of acres of crops have been leveled by hail. Here are some of the pictures from recent storms (via Twitter): 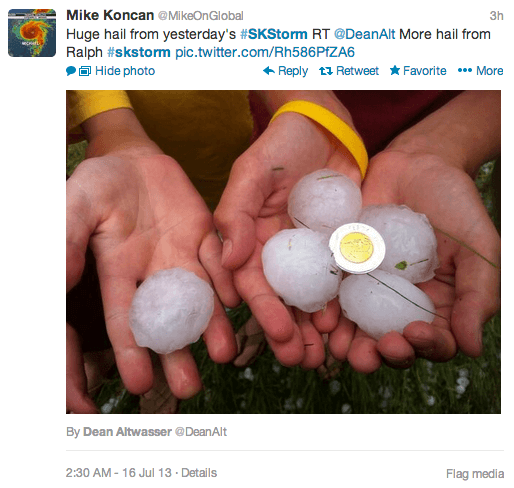 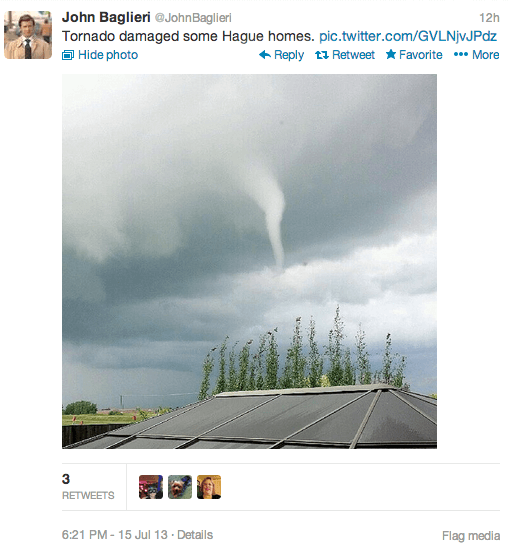 Now, thunderstorms can bring conditions conducive to other severe weather, including tornadoes (sans sharks, we hope).  Although the conditions favorable to tornado development are easily recognizable, even a seasoned professional can not predict with certainty, when or where a tornado will develop, let alone what devastation will follow in its wake.

“We could expect a tornado at any moment…Time will tell.”

These statements from Greg Johnson, as his team of storm chasers kept the online community updated on storm progress in Saskatchewan earlier this week.

We wondered what it takes to be a storm chaser, so we tracked Johnson and his team down at the Canadian Farm Progress Show.  In this video, Johnson explains why he isn’t crazy, how his team remains relatively safe in extreme conditions, and…what storm chasers have in common with farmers?

If you cannot view the embedded video, click here.

Confirmed avian influenza cases in Ontario climbs to 12, with 2 suspected cases under review