The interesting news on the cut-out front is that the Canadian AAA cut-out has finally caught up to the equivalent US Choice cut-out (in Canadian dollar terms). At the end of July the AAA cut-out was reported at $194. Meanwhile the Choice of $188 converted to $193 Canadian equivalent or $1 lower than the Canadian cut-out that week. From February through early June the cut-out spread between the 2 countries was extremely wide, ie US over Canada by $10-25/cwt. It’s not unusual for the cut-outs to trade fairly evenly at this time of year but it was most certainly a welcome sight after the wide spreads that had persisted earlier this year and were a factor in the wide basis levels we saw in the fed cattle market. 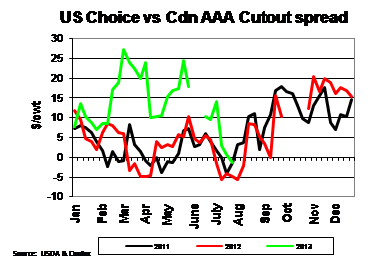 CowSignals, Cargill, and the Curious Case of the Moaning Cow