When Bob Dylan appeared at the Newport Folk Festival in 1965 playing an electric guitar, he was booed off the stage for being untrue to the genre.

Ten years later, country awards named John Denver Entertainer of the Year – to the chagrin of presenter Charlie Rich (“Behind Closed Doors”), who, in front of millions of people, lit the envelope on fire because he considered Denver too pop for the award.

Flash forward to 2013, and it’s hard to imagine such animosity between genres. Music has blended, and so have artists and audiences. Rod Stewart is crooning elevator music. Things have changed.

It’s just like TV — if you don’t like the channel, change it to something else, but don’t destroy the TV.

And that’s what I fear is happening in agriculture. To me, one of the biggest threats to farming right now is public confusion over what’s good and what’s bad.

Case in point: the “threat” of so-called industrial farming, the zeal of self-interest groups to perpetuate fear and make the public feel uneasy about anything grown in significant quantities, and the farm sector’s ongoing struggle to make conventional agriculture appeal to consumers.

It struck me last week when a powerful coalition led by the Ontario Federation of Agriculture unveiled a report that said there’s an economic case for developing a cornstalk-fuelled bioprocessing plant somewhere in corn-rich southwestern Ontario. The report talks glowingly about this form of “green” chemicals and energy.

At some point, the province will likely be asked to support this effort, which makes sense. Even though Chatham-Kent, Essex, Middlesex and Lambton are rich in agriculture and natural resources, they’re job poor and painfully in need of the kind of economic boost offered by such a processing plant, along with the ongoing spinoffs.

But bioprocessing raises all kinds of questions with the public. Here are two of the biggest ones: how can farmers use agricultural land for industrial purposes while the world wrings its hands over how to feed a growing population? And how can any stewardship-minded farmer justify removing organic matter from fields.

Fortunately, answers exist. Another new report on the OFA website claims nearly 850,000 acres of surplus hay and pastureland exists now in Ontario, as a result of an almost 25 per cent decline in cattle numbers over the past 20 years. So why not use that land for biomass crops? You get soil improvement benefits, increased biodiversity with little fertilizer or crop protection requirements and erosion prevention and minimum crop maintenance.

And as for corn stover, research from the University of Guelph has shown that in some instances a significant percentage can be removed without affecting the soil’s organic matter content.

But here’s the bottom line: Anything with the word “bio” attached to it raises flags, and the industry needs to be out in front of the issues, explaining terms such as “bioprocessing” to people or risk being throttled by opponents or opportunists. Green energy can be positioned as something good for farmers and the public, but the industry can’t wait for the public to come forward with its questions.

Doubts and suspicion among the public about food production are simply not good for any kind of farming. 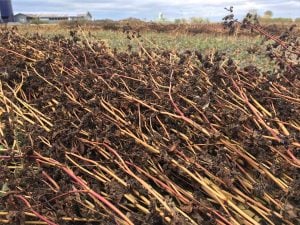 High Times in the Soybean Sector: This Project’s Up in Smoke

One thought on “Fuel vs Food: Different isn’t Always Bad, But It’s a Tough Sell”