The summer of 2013 is turning out to be nothing like the last two years, which may prove problematic for several first-time soybean growers in the province. While 2013 soybean acres likely did not hit the massive 1.3 million mark once estimated, there are likely about a million acres of the nitrogen-fixing crop out in the field in Manitoba. Soybeans love heat and August moisture, two things that aren’t necessarily the norm for much of the province.

In this SoundCloud interview, Kristen Podolsky, production specialist with Manitoba Pulse Growers, updates us on the relative maturity of the soybean crop, how long the crop will take under average conditions to move into a maturity range less at risk to frost and explains how night time temps under 10 degrees C can significantly hold the crop back.

Growing degree days and accumulated corn heat units to date range in the low to mid 90th percentile of normal, Podolsky adds, though a week of warmer temps in the forecast could see those percentages rise close to average for the date. That said, another 40 days frost-free may be too much to ask for, given this summer’s trend to the cooler side. 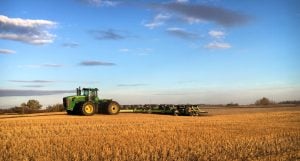 Agronomy Geeks Ontario — Ep. 7: All You Need to Know About Using Fluency