Ah, Artemesia absinthium. If you’ve ever had the misfortune of being acquainted with absinth wormwood, you’ll likely never forget it. Many describe the plant by its appearance and odor, both likened to pasture sage. Absinth’s odor is strong, however, and in my experience, the pollen profoundly irritates the respiratory system. In fact, you can quite often smell absinth before you see it.

The plant, native to Europe and Asia, has a persistent tap root, which, explained Nadia Mori, regional forage specialist with Saskatchewan’s Ministry of Agriculture, in the Ministry’s latest webinar, can reach two inches in diameter. 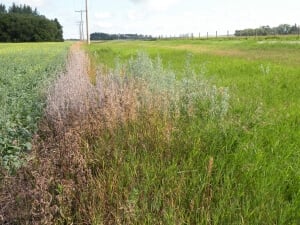 A prolific seed producer, absinth can grow from two to five feet in height on a variety of soils. It also appears to be allelopathic, perhaps explaining its hasty spread. You’ll commonly see absinth in and around railways, dumps, roadsides and other disturbed soils.

Pest Status: In Manitoba, Saskatchewan and much of the United States, absinth is considered a noxious weed, but not in Alberta. Why? I had the very same question. So I sent an email to the Pest Surveillance Branch of Alberta Agriculture and Rural Development. There has actually never been a formal request for absinth to be added to the list of noxious weeds, and the Alberta Weed Recommending Advisory Committee has not seen it as a problem weed for the entire province. Municipalities can add it to their list of noxious/prohibited weeds, if deemed necessary.

Control measures: “Over the years I’ve had to have a bit of a reality check. I initially thought I would eradicate this plant…. I’ve learned now that there just seems to be an endless seedbank,” said Lorne Klein, regional forage specialist with the Saskatchewan Ministry of Agriculture, in the aforementioned webinar. “This is a war that will never be over, but what I’m focusing on is winning the battles.”

According to Klein, the first defence is to have a healthy, vigorous pasture stand. This, due to absinth’s opportunistic nature to spread most visibly in disturbed soils.

Have hay bales contaminated with absinth plants/seed? Klein suggests either:1. feeding bales intensively on small sight, then composting the manure pile
2. feeding bales extensively (bale grazing) on pure rhizomatous grass and following up with herbicide Chemical control: This year the Agricultural Demonstration of Practices and Technologies enabled the Saskatchewan Ministry of Agriculture to look further into chemical control possibilities for absinth.

Herbicides were trialled in three locations in Saskatchewan and the results indicated that 2,4-D would require multiple treatments, Dicamba showed suppression through top growth control and Restore II, Grazon and Reclaim showed good to excellent control (though absinth is only listed on the Restore II label). These herbicide applications will control/injure other broadleaf plants and many have residual activity, however, which could impact pasture quality and allow for greater movement of weed species.

It’s always recommended you read the labels and check the Crop Protection Guide for your province to find out more about chemical control strategies.

Unfortunately, there are no known biological controls for absinth wormwood right now. And though there are insects that prove promising in its native habitat, they will not be introduced to Canada due to a wide host range. 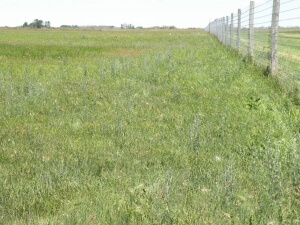 Physical control: The best success we have had on our farm is through pulling the plants by hand. I highly recommend wearing long sleeves and gloves, because the plant will likely irritate your skin as it did ours. Masks might also be considered, or a lozenge of some kind later in the day.

If pulling plants by hand, consider doing so after a rainstorm, to lessen the likelihood of straining your back while also maximizing uprooted root mass. If the absinth has already set seed, consider destroying the plants.
There hasn’t been much research done to look at integrated control strategies, but Klein considered cutting/mowing absinth in summer, grazing/cutting again if high re-growth and then apply herbicide to rosettes (likely more vulnerable to the spray). Again, more work needs to be done on tactics such as this.

Does your farm/municipality have problems with absinth? What has worked best for you? Photos courtesy of Saskatchewan Ministry of Agriculture.

One thought on “The Bane That is Absinth Wormwood”