I had the great pleasure of joining the Manitoba Canola Growers Association for its second Canola Leaders event held November 29 and 30, 2013, at Brandon, Manitoba. About 20 young farmers participated in two days of fun, networking and learning, with a heavy emphasis on the importance of food, understanding consumers, learning leadership skills and building relationships with media.

When I say young, I mean somewhere around the 30-year-old mark or so. Not youth young, but young in the relative sense; Baby Boomers make up a huge chunk of the agriculture demographic, just like in our general population. “Young” is an important distinction, but also a somewhat misleading one. As in, when I say these are “young farmers,” what I really mean is these are farmers running their own farm businesses, raising families and leading vibrant careers. These are not kids — young farmers are adults whose time has come to begin taking on leadership positions within grower organizations, as well as on the farm.

But, why, you may ask, did the Manitoba Canola Growers put on this event? I’m so glad you asked. The organization, through a partnership with the provincial government ag department and with industry support, recognized that standing up and taking on a leadership role requires certain skills in order to confidently step up. The two-day event featured training on everything from formal dining etiquette, to how to present an argument to the federal ag minister (played by real-life senator JoAnn Buth). Yes, really.

The Manitoba Canola Growers is, like almost every other farm organization, heavily represented by farmers over 50. That’s not a bad thing, of course, but the group recognizes that now is the perfect time for this generation to mentor the up and comers. For groups whose average age tips closer to retirement, the need for attracting fresh new faces to the boardroom table is equated with survival. (The same is true for the farm, and farmers unwilling to step aside and let the younger generation lead there, too, but that’s a different column).

Look, I get it. Sitting on a board and traipsing about the countryside over the winter season for meetings isn’t necessarily high on the List of Fun Things To Do as a farmer, but here are a few reasons why you should consider doing so:

1. The more farmers that get involved, the less likely we’ll have the same farmers on every board. This matters in several ways — one, serving takes time and energy. Time away from your farm and family. Those that have stepped up will eventually burn out or the cost to their family and farm will become too great, perhaps meaning the have to step down. Share the load, and all that.

2. There’s another aspect to a small group of farmers serving on several boards — the same visions, ideas and personalities will shape policy going forward. This isn’t meant as a slight to any of those serving, far from it, but the more minds percolating a problem and coming up with solutions, the more likely we’re going to generate new and more developed ideas. Having a decent representation from a geographic area minimizes policy and decisions that get shot down over the “It’ll never work in my backyard.”

3. If you’re not at the table, you can’t shape the outcome. When boards or groups feature mostly 60 somethings, you’ve got the most soon to retire making decisions that will impact those a generation (or two!) younger. If you want to engineer the kind of farming environment you’re going to actually farm in, you have to be part of the policy and decision making process. Full stop.

4. Sick of traditional meetings? You can’t expect advancements in meeting technology to be picked up by a group that isn’t super comfortable with it. Joining a group means you have the opportunity to tailor events, meetings and more in line with your life stage and skill set. Google Hangout, GotoMeeting and more means that not all face to face meetings have to be, well, face to face. (Special bonus: Homemade coffee kicks the pants off of anything you’ll get in a banquet room.)

5.  The alternative title for this column could also be, “Now is the time to mentor, Sixtysomethings.” Those not-so-young-anymore members have farmed through droughts, monsoons, major policy shifts and changes and monumental advancements in technology at the farm level. These men and women are an invaluable resource to the thirtysomethings. So this is a challenge to both generations — to be mentored, and mentors, be willing to take the time to share what you’ve learned, but remember, we’re not going to do exactly as you say…that’s not the point. But, and I draw on this from a personal experience, the discussions, the history, the perspective on the agriculture industry from someone twice your age is always valuable, if only as a means to realize how you’d do it differently. Also, I highly recommend asking these elder statesmen about the fun you can have, the friends you’ll make and the places you’ll see as a part of committing to a leadership role.

And, there you have it. I challenge you, my peers, to stop and consider stepping up the next time a call goes out for nominees for board positions with grower groups, associations and more. After all, the industry you’re shaping is your own.

Below: Senator JoAnne Buth and little ol’ me. I learned so much from her in just two short days. The neatest thing is that she said she started engaging on Twitter because of me. Learning isn’t exclusively passed from the old to the young. We all benefit when it goes both ways. 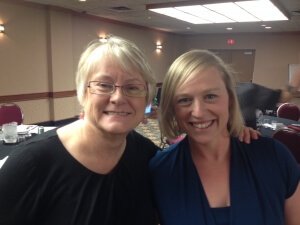 One thought on “What Are You Waiting For? Now is the Time to Step Up, Thirtysomethings”