January 9, 2014 – The Canola Council of Canada (CCC) announced its new target for Canada’s canola industry earlier today, in Winnipeg, Manitoba. The CCC aims to increase the demand for canola, create a stable and open trade environment and sustainably and profitably increase production of canola to 26M tonnes by 2025.

The CCC’s new targets have been set before the end of the last ten year plan, Growing Great 2015. 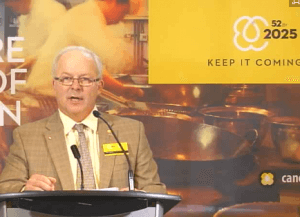 “First,” explained Terry Youzwa, chairman of the CCC Board of Directors, “it’s because the industry has exceeded the targets set in Growing Great 2015 well ahead of schedule…. It’s also in fact, mainly, about the growing world demand for healthy oil and high quality protein to meet global needs.”

The CCC explained that its goal of 26M tonnes of Canadian canola will be achieved by increasing yield to an average of 52 bu/ac on 22M acres.

Oil quality improvements, according to the Strategic Plan published in conjunction with this announcement, will be measured by: decreasing saturated fat content to 7% or lower, increasing protein availability and attracting high oleic and specialty oils to 1/3 of Canada’s canola acres by 2025.

You can find the Canola Council of Canada’s Strategic Plan on their website: http://keepitcoming.ca

The strategic plan also outlines positive trade goals (including: “No trade impediments resulting from non-science based regulation”), increases in canola’s vegetable oil share and the goal of narrowing the value gap between canola oil and meal.

According to Youwza, canola generates 19.3B annually in economic activity in Canada and nearly a quarter of a million jobs.