I feel like I probably could have written a daily update of all that went on this week, as each day had the RealAgriculture team busy. If you attended CropSphere or any of the Crop Production Week festivities in Saskatoon, perhaps we even crossed paths. The week kicked off with a bang (and more than a little inappropriateness) when Jay Onrait and Dan O’Toole kicked of CropSphere — Shaun, a big fan of their podcast — managed to get past his celebrity crush and actually interview the pair after their performance. The resulting interview is unlike any we’ve likely done on the site, and probably slightly inappropriate, so you’ve been forewarned. You can see that here.

It’s not all fun and games at these events, of course, and as Tuesday dawned (and I nearly got bumped from my flight to Saskatoon!), the team went into show coverage mode and starting taking it all in. Drew Lerner, of World Weather Inc, spoke to a packed house as the lunch hour keynote speaker, and as always was more than a little swarmed after his presentation. I managed to elbow my way in for an interview (see that here) to find out what his best guess is about the weather we’ll have for seeding. The outlook is far less extreme than the last few years, which is good, but those of you in Alberta with limited soil moisture reserves could be looking at a too-dry seeding window should you lose the snowpack between now and April. He also didn’t have great news for the eastern prairies (where I live) so I may not want to check his forecasts again. Hear what Drew Lerner had to say here.

There are always announcements coordinated with any big farm conference, and this week of CropSphere was no different. The oat grower group announced a million dollars for mycotoxin research, Viterra pledged $5 million for wheat breeding and, perhaps most exciting, Health Canada announced that flax had received an approved health claim. I spoke with Kelley Fitzpatrick, a nutritional consultant working with the Flax Council of Canada, on what this means for the flax industry and what happens next to grow more flax markets. Hear that interview here. 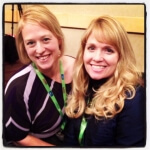 I work from home, and though my job is very social online, I do truly value the time I get to spend with my colleagues and our followers and readers when I’m on the road. This week, I also got to meet Michele Payn-Knoper, a dairy farmer, author and agvocate, whom I’d only ever interviewed via Skype or chatted with on Twitter. Payn-Knoper hosted the final event of CropSphere, sharing her ag story and encouraging others to do the same. It was a fantastic way to cap off the conference!

See you next week at Ag Days in Brandon!