The Saskatchewan Ministry of Agriculture’s insect surveys and forecasts have been published online and Scott Hartley, provincial entomologist, was on hand at Saskatoon’s CropSphere to summarize some of the findings. In the video below, RealAgriculture’s Lyndsey Smith speaks to Hartley about three of Saskatchewan’s most revered agricultural pests: the cabbage seedpod weevil,  bertha armyworms and grasshoppers. 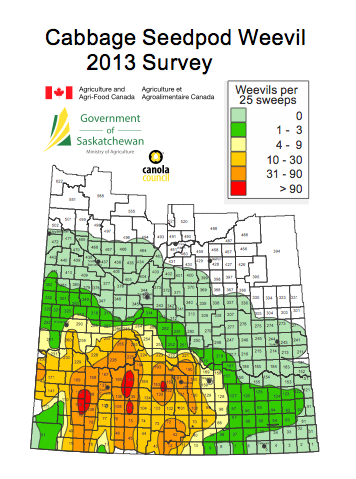 “Although [the cabbage seedpod weevil] has been in the southwest for several years, really it’s just starting to move into the more traditional canola-growing areas in the southeast of the province,” Hartley explains in the video.  “They’re moving north too…but there seems to be a more predominant movement from west to east.”

Thus, growers can expect to see increases in cabbage seedpod weevil populations in many areas, but bertha armyworm numbers are actually expected to decline overall. The change is  anticipated due to typically cyclical population changes and increases in natural predators and disease.

And grasshoppers? The 2014 forecast shows a hot spot near Meadow Lake. Could they be an issue for producers this year?

Hear Hartley’s thoughts on all three of these pests, below.

Insecticide/Fungicide Mixing Risks in Canola & the Importance of Pollinators

The Agronomists, Ep 90: John Gavloski and James Tansey on lesser-known and up-and-coming pests