If you’ve intentionally found your browser open to this article, chances are you’ve heard the melodious call of an auctioneer and considered, one day, also sitting in the limelight of an auction sale. Either that, or you just really like Danny Hooper.

In 2013, I attended Western Canadian Agribition as both a Cattlemen’s Young Leader and a journalist. It was my first time to the show, and I was excited even before being given the chance to participate in the Winners Circle auction as a floor runner.

Taking that turn running gave me a new view of the auction arena and new respect for the employees, as I suddenly became very aware of just how quick auctioneers, emcees, floor runners and bid spotters have to be. The entire process (when done well), is smooth, it’s successful and — likely to the dismay of the families of perpetual bidders — it’s an absolute blast.

I’d be lying if I said my role in the ring that day didn’t feed my growing interest in auctioneering. I’ve since asked numerous auctioneers about the process and, at the Alberta Beef Industry Conference last week, I finally recorded one such interrogation.

So, what exactly does it take to become a successful auctioneer? Well that, my friends, I’ll have to leave up to the motivational speaker, comedic emcee, celebrity benefit auctioneer and very charismatic, Danny Hooper, to explain… 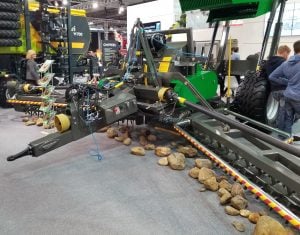 Is the Night-Time the Right Time to Spray?

One thought on “Danny Hooper on Gettin’ That 50-Dollar bid”