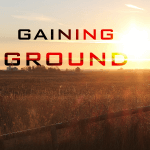 Editor’s note: Gaining Ground is a series of feature articles written about cultural management practices common to all production systems. With a heavy focus on soil management and productivity, Rob Wallbridge, a Quebec farmer and blogger, will tackle a new topic in each article, from the use of cover crops, to integrated weed management and forages in rotation, and all the way through to fly control.

Worried about rising fertilizer costs and declining crop prices and wanting to optimize input efficiency? Can’t decide whether to “feed the soil or feed the plant”? There’s a simple yet incredibly complex answer for you: soil biology. I like to think of “biological farming” as the place where the best of organic and conventional agriculture meet.

Organic farmers rely on soil biological activity largely by default. With the choices for soil fertility mostly limited to animal and green manures, along with unprocessed, mined minerals, organic systems rely on the biological activity of a healthy soil to cycle these nutrients into plant-available forms.

Read more: An organic farmer walks into Monsanto, and this is what happened

The importance of soil biology is gaining ground on the conventional side, too, but the “business case” is harder to make when soluble, plant-available fertilizers are close at hand. However, both organic and conventional farmers who appreciate and work with the biological systems of the soil are reaping big benefits in terms of yields, profitability, and sustainability

Increased Yields: To prove the yield point, we don’t need to look any further than the world record holders for corn yields. This past year’s winner generated some hoopla when an erroneous newspaper article claimed that his crop was “all organic.” It wasn’t, of course — David Hula had access to all the same fertilizers, herbicides, fungicides, insecticides, and genetically-modified seeds as all the other conventional farmers out there. But if this was all it took, every farmer would be topping 400 bu/ac. Granted, Hula managed his crop exceptionally well, and he got lucky with the weather. But in reading about his success, what stands out is his focus on soil biology. He credits much of his success to products that contain, feed or otherwise support soil microbes. The previous world record holder, Francis Childs, grew corn on soils with a 13-inch deep aerobic zone – his crop roots had access to at least twice the volume of biologically-active soil available on most farms — he, too, understood the importance of soil biology.

Making Money by Saving Money: Active soil biology boosts input efficiency far beyond typical assumptions about the contribution of soil organic matter to nutrient supply. Estimates vary, but the majority of sugars produced during photosynthesis are actually exuded out through the roots into the soil; the plants feed the microbes, and in return the microbes feed the plant. By forming associations with plant roots, organisms like arbuscular mycorrhizal (AM) fungi essentially increase the effective surface area of the roots, allowing them to access more nutrients and even converting these nutrients into plant-available form. Soil bacteria are themselves high in nitrogen – when they die or are consumed by protozoa and other higher life forms, they supply nitrogen to the growing crop. While conventional wisdom dictates that it takes 0.95 to 1.2 pounds of fertilizer nitrogen to produce a bushel of corn, with soil organic matter supplying 20 lb to 30 lb/ac of N, experienced biological farmers report producing high-yielding corn with as little as 0.37 to 0.5 pounds of added nitrogen. This level of nitrogen efficiency takes time and effort to earn, but halving the nitrogen bill is a goal worth setting!

Resiliency and Sustainability: Through the action of soil organisms, plant roots, and their exudates, biologically-active soils have better aggregation and porosity. The improved soil structure will make soils more resilient – able to handle heavy rainfalls without eroding, and able to hold more water in reserve when it doesn’t rain. Good soil structure also increases the depth of the aerobic zone, and the deeper the aerobic zone, the greater the supply of oxygen for microbial populations, which can feed a greater root mass, while respiring carbon dioxide, which will diffuse out of the soil and into the plants, driving more photosynthesis, and hence more carbon secretions to aggregate soil particles and feed more biology – once the cycle is going, it simply builds upon itself.

To recap, at its most basic level, the role of biology is to cycle nutrients in the soil. The more effective this nutrient cycling is the more efficient crop production will be. Maximizing biology activity is a function of creating an ideal environment for soil microbes, growing and feeding them, and letting them and their byproducts feed the crop. I hope to explore how to accomplish these goals in future articles.

The Focus of Barley Research in Alberta

Rob Wallbridge is an organic farmer from Quebec. He is also a father, extensionist, writer, speaker, and rabble-rouser. He advocates for high-quality organic food and informed communities in agriculture and beyond. He strives for balance in all things and is always happy to answer questions and engage in intelligent conversation. Rob blogs at The Fanning Mill and tweets at @songberryfarm

Big corn yields demand intense management. From tillage strategies, to nitrogen management, variety selection, pest management and more, RealAgriculture’s Corn School is a video series that tackles every facet of the corn growing season in an engaging and informative format. Our Sponsors The Corn School is made possible by support from BASF and PRIDE Seeds.