The U.S. Senate passed the 956 page, $956.4 billion Farm Bill on Tuesday, following last week’s House approval, and is now awaiting President Barack Obama’s signature. The bill has been hugely controversial for many reasons, including Country of Origin Labeling (COOL), which remained in the 2014 Farm Bill despite reaction from eight major lobby groups last year.

Hear more: Chris Clayton of DTN Discusses the Passing of the US Farm Bill

“We hear the president will now sign [the U.S. Farm Bill] probably by the end of the week,” Saskatchewan’s Premier Brad Wall told media at the 2014 Agriculture Trade Summit in Saskatoon this week.

“The Harper government’s been working on this,” said Wall. “They’ve been making a strong case, they have not ruled out retaliation if the Americans persist and the province of Saskatchewan officially supports that position…”

But how long until we actually see retaliation efforts? Agriculture Minister Gerry Ritz says it’s part of the World Trade Organization (WTO) process, which starts with oral arguments in mid-February.

“We believe in science-based trade and we believe in rules-based trade,” said Ritz. “You don’t enforce trade by breaking the rules, and that’s the point we’re trying to make to the Americans.”

The list of U.S. commodities that may be targeted for retaliation was published July 7, 2013, following U.S. failure to comply to the May 23 COOL compliance deadline set out by the World Trade Organization.

You can hear Premier Brad Wall’s full response to COOL in the video below. 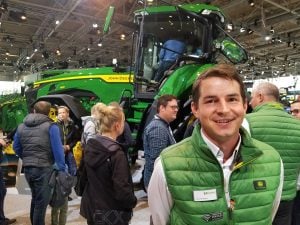 Our soils may arguably be one of the most essential factors in our farms. Without soil, where and how would we grow our crops? John Deere seems to agree with this statement, with the rollout of the 8RX tractor series at Agritechnica in Hanover, Germany. RealAgriculture's Shaun Haney caught up with Simon Schowalter at the…Read more »

USDA Finds Little, if any, Economic Benefit From COOL