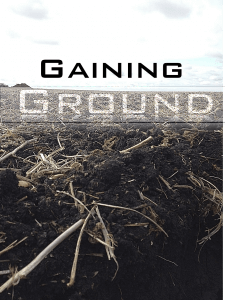 First, a confession: I love plowing. Growing up, fall plowing was always one of my favourite chores, and I’ve still got the trophies I won in various county plowing matches as a teenager. Even now, few things give me as much satisfaction as an arrow-straight, neatly-turned set of furrows. It makes me a dinosaur, I know – I’m doing my best to reform my practices and maybe even appreciate the beauty of trash (oops, I mean “residue”). So let’s look at tillage from the perspective of soil health and soil biology.

Why Till?
All but the staunchest of no-till advocates will admit that there are benefits to tillage, even with respect to soil health. Tillage incorporates residues into the soil, bringing them in greater contact with soil organisms and reducing nutrient oxidation and/or surface leaching. It also adds oxygen to the soil and releases carbon dioxide, providing a boost to both soil microbes and plant photosynthesis (it’s easy to see this effect after row cultivation or even side-dressing – the nitrogen isn’t the only thing creating a crop response). Carefully-timed tillage can also aid in water management, either by breaking a crust and allowing water to soak in, or by creating a “dust mulch” at the soil surface by disrupting soil pore channels that increase evaporation rate.

Why Not Till?
On the other hand, tillage has been described as a “tsunami” in the microcosm of the soil. It is particularly destructive to the higher levels of the soil food chain and destroys the delicate fungal hyphae networks that contribute to both plant health and soil particle aggregation. No form of cultivation improves soil structure and aggregation. Excessive tillage, particularly in the absence of sufficient organic matter additions, will introduce too much oxygen, “burning up” soil organic matter and “burning out” nutrient-cycling soil microbes. The net result of this, coupled with a lack of surface residue, is soil that is prone to erosion and compaction. Over the long-term, reducing or eliminating tillage will allow a higher diversity of soil life to function and flourish, leading to better nutrient retention and cycling. (For background information on what lives in soil, see this post here.)

Guiding Principles
Our challenge as farmers is to find a method that maximizes the benefits and minimizes the drawbacks of each system. The first step is to admit that there will be no “one answer” that fits all crops, all farms, all regions, all years. Knowing and applying these principles will help balance short-term production goals against the long-term goals of building more resilient, self-sufficient soils.

Smart tillage is using the minimum necessary to create an aerobic soil, eliminate compaction, control weeds and manage residues. If tillage requirements decline over time, soil health is headed in the right direction!

Gaining Ground is a multi-part series on cultural management practices for all management systems with a heavy emphasis on the importance of soil health and productivity. For the entire list of articles, click here.