Editor’s note: This is the second edition of a new weekly markets column authored by Brennan Turner, founder of FarmLead. Check out www.FarmLead.com for more, and find Brennan on Twitter as @FarmLead.

On Sunday, March 16th, Crimea, the southern peninsula of Ukraine will vote to separate from its current country and join Russia. This referendum is considered illegal by most of the rest of the world and it could be a tipping point in this stand-off (i.e. Ukrainian and Russian armed forces going at it).

In the USDA’s monthly report, the market sold-off on the government agency’s projections not meeting trader’s expectations. Ending stocks for US corn were lowered by 25 million bushels due to an increase in exports by the same amount, leaving the year-end number 1.456 billion bushels. U.S. soybean inventories were dropped by five million bushels (pre-market expectations were for  nine million) to 145 million bushels, the second lowest number since 1976. Wheat ending stocks for the U.S. were unchanged while world inventories rose slightly. Ultimately, the market was in bull mode for a few days leading up to the report but profit-taking started to take over before the release and when expectations weren’t met, the sell-off continued.  In reality, the report told us much of what we already knew so it’s now onto the next report, the 2014/15 acreage estimates on Monday, March 31st.

The soybean trade see-sawed all week long on the WASDE report numbers and Brazilian production estimates being cut, but the major point of contention that kept the oilseed lower was based on concerns China’s economic growth is starting to slow. Further, the People’s Republic cancelled 600,000 MT of South American soybeans as crushing margins are getting pretty thin due to soymeal demand falling a bit & inventories starting to build. Cancelling some orders will shut down the clogged pipeline for a bit.

Adding to the downside pressure was Allendale Advisor’s annual farmer acreage survey getting released which showed soybean planted area increasing almost seven per cent year-over-year to a record 83.2M acres (the U.S.D.A.’s forecast is currently only calling for 79.5M acres). Making up for the increase was corn acres falling three per cent to 92.35 million (still the fourth largest in history though!) and wheat acres down roughly one per cent to 55.23 million. While some analysts are blaming the cold, harsh winter for the sharp change in seeding intentions, the reality is, current profit margins is much better going with the oilseed. That being said, Goldman Sachs, among others, is forecasting a sharp decline for soybean prices in the second half of 2014, all the way down to $10 per bushel soybeans (November contract is currently sitting at $11.73).

Canadian Prime Minister Harper recently announced that Canada and South Korea successfully concluded negotiations for a free trade agreement that will certainly decrease the $4 billion trade deficit we had with them in 2013. This is big for a few other reasons though: South Korea is a large potential market for Canadian livestock while the number one consumed vegetable oil in the Asian nation is our favourite to grow, canola. The tariffs that existed on pork, beef, & seafood will be phased out over the next decade or so while Canadian automakers were upset the 6.1 per cent import tariff on Korean cars will be phased out in just two years. Kudos to the Prime Minister’s office though & his team of foreign trade negotiators (I had the pleasure of meeting a few at last month’s Sask Ag Trade Summit) as they continue to expand the Canadian trade network.

Food for thought: when Prime Minister Harper came into office eight years ago, there were five free trade agreements and now, there are 43, begging the question, what and/or who’s next? 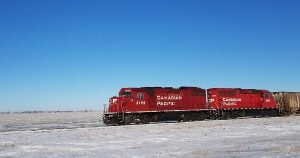 Editor's note: This story has been updated with quotes from CN Rail's interim CEO. The federal transport and agriculture ministers sent a letter to the chief executives for Canadian National Railway (CN) and Canadian Pacific Railway (CP) on Tuesday expressing concern over problems with rail service. "We are writing regarding our concerns with respect to…Read more »

Not the November we wanted — this week in the grain markets

The Markets This Week — Expensive US Wheat, Thin Margins & Questions Around Chinese Demand