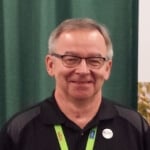 The Alberta Wheat Commission (AWC) announced today that Tom Steve has been named as the organizations new general manager, effective as of June, 2014.

Steve was most recently the general manager of the newly formed Saskatchewan Wheat and Barley Commission. In the past, he’s worked for the government of Saskatchewan and with United Grain Growers and Agricore United, followed by six years with Viterra.

Steve says, “AWC has strong programs and strategic goals in place, and I look forward to building on these to ensure Alberta’s wheat growers remain profitable. I will also promote strong collaboration with the wheat commissions in Saskatchewan and Manitoba to ensure we maximize grower check-off dollars and opportunities for growth.”

An approaching recession, an aging government, and just-in-time politics, with Paul Wells