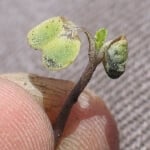 This spring has started off much cooler than usual across much of Western Canada, with forecasts trending towards more cool temperatures. With these cool temperatures comes the risk of frost injury once crops have emerged, but just because a frost occurs does that mean you have to re-seed? Where should you look first? There are many questions that get asked when a frost occurs and here is a quick explanation on what to expect.

All crops have a different frost tolerance — wheat, barley, peas, corn and lentils all tend to tolerate frost a little better because their growing point is below ground where it is better insulated by the soil when a frost occurs. With crops like canola, flax and beans the growing point is above ground and unprotected from freezing temperatures so they tend to be more susceptible to frost events.

One major factor that affects a plants ability to withstand frost are the climactic conditions before and after frost. If the conditions leading up to the frost are consistently cool then the plants will be more tolerant to the below freezing temperatures. For example, canola that has not been exposed to cooler temperatures and the temperature drops rapidly then, -3 degrees C would likely cause damage to the plant. If canola has been experiencing cooler temperatures then even a drop beyond -5 degrees C may be tolerated. (Click here for a Canola School episode on frost damage.)

If after a frost the temperatures rapidly increase then this can also cause more significant damage to your crop as the rapid increase in temperature can cause frozen cells to burst whereas a gradual temperature increase may allow them to simply thaw out.

Time below freezing is another factor that must be considered, if the time below zero is only a couple hours you shouldn’t see the kind of damage you will see as when the temperature is that low for four or five hours for example. To take things even further, low spots in fields tend to have higher frost damage as frost “settles” in the lower areas.

One more factor to consider is soil texture/type. A sandy soil in the brown soil zone with less than adequate moisture and a clay soil in the black zone with good moisture have an effect how much damage there will be. The black soil with moisture will tend to “hold” more heat than the sandy brown soil will, potentially protecting the growing point. On top of this, if a field is covered in straw or has more “trash”, then there may be more damage. Soil warms during the day, and releases some of that heat back during the night, creating a slightly warmer area at ground level; straw does not do the same.

Identifying frost damaged canola can be difficult, but generally you must look at the growing point. If the growing point is green and healthy looking then it probably hasn’t been hurt too badly by frost. If the growing point is black, brown or purple, it’s likely dead, and, depending on how many plants are left per square foot, you may need to look into reseeding (Click here for more on that.) Another frost damage sign on canola can be curled or cupping margins (outside of the cotyledons). Excessively dark plants or excessively yellow plants can also be a sign of frost damage. Remember, you cannot see damage the following day typically. It is best to wait at least two to four days before scouting to evaluate damage.

Frost happens, but damage isn’t always severe. Wait a few days, assess plant injury or death, and know your minimum plants per square foot (or meter) to judge when to make the call to re-seed.

Unpacking the promise of cover crops

Poll: What’s the plan for flea beetle control in ’23?

No matter where you turn, there's been a lot of talk about global recession, not just in the United States and Canada, but also in other G7 countries are facing some really hard economic times ahead. As interest rates have gone up, you'd expect protein demand to drop. This is not the case, as the…