This week, I had the distinct pleasure of experiencing a Beefbooster bull sale. I thought I was a veteran at bull sales, and was looking somewhat forward to the blast of the auctioneer’s voice through the speakers, being enveloped in the smell of a crowd, hamburgers and coffee and the fast pace of a heated sale. I was altogether surprised and delighted by what I didn’t expect at all.

It was quiet in the visiting area, with only a couple ladies speaking in the corner of the office. Past the second door was the arena. The crowd was sparse, but comfortable, quiet, but welcoming. Most ranchers would think this was just the calm before the storm; that in time the auction would start and the quiet ponderings would be a memory forgotten.

But, actually. The sale had begun.

It was in 1970 that the vision for BeefBooster began. The idea was to breed for traits demanded by bull buyers, with an emphasis on efficiency. Today, BeefBooster has five strains of hybrid cattle with strict seedstock criteria. Animals are selected largely based on genotype, as the website states: “At BeefBooster, we don’t guess. We test.” 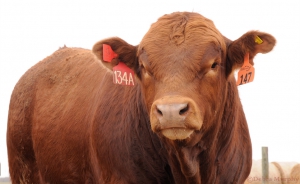 The sale process is simple, equitable and intriguing. Buyers sign up in the fall, and in this case, were given the option of three classes of bulls. The “Red” class was valued at $3800, “Orange” at $3550 and “Yellow” at $3300. With this process, buyers and sellers alike know the price well in advance of the sale, and can budget for that. The price is set by a “fair price formula,” which is largely based on the market of BeefBooster-influenced calves. Of course, there are risks with this type of system, but the BeefBooster-supporters I spoke with this week had no qualms; the genetics, they said, were all good and the pricing fair.

After you sign up to buy bulls, you are sent the Sire Selection Sheets and can do some homework in advance. The Selection Sheets, not unlike many bull sales, include both phenotypic observations and genotypic observations. The latter come in the form of Expected Breeding Values (EBVs). An EBV is an animal’s own genetic value on a specific trait, where the more familiar Expected Progeny Difference (EPD) is an animal’s genetic value to parent a specific trait. Though the science can be a little more complicated, an EPD can be assumed as roughly half the value of an EBV (as progeny will receive traits from both parents). For BeefBooster stock, the EBVs use 2005 sire data as a base.

In addition to those values (for birth weight, weaning weight, yearling weight, back fat etc), BeefBooster also provides the VI or Value Indicator for each bull. The VI is an economic breeding index that sums the economic value of each of the EBVs, with the difference reflecting the potential profit difference per progeny. If, for example, you compare Bull 1 with a VI of 122.9 to Bull 2 with 130.4, Bull 2 will throw calves that are $3.75 more profitable, on average.

On selection day, bull buyer names are drawn to determine the order of selections. The  day is quiet, with little known hostility as bull selections progress quickly. There was a definite sense of community at the sale, as everyone looks to increase the genetic potential of their herds.

I must say, I love a good auction, but this style was so astonishingly comfortable and the overwhelming emphasis on genetic potential and data management remarkable. I can guarantee this week’s Beefbooster sale won’t be my last.