Waking to the clatter of wind against the house, a dark sky and a still-sleeping sun never feels like a good omen. On June 5th, the early morning grey was entirely worth the effort, as I joined the Alberta Farm Writers’ Association on their annual tour.

Our first stop continued the northward journey, into the heart of Vermillion: Lakeland College. The campus was beautiful: well-maintained, glowing from recent rains and entirely inviting.

We were joined by the agriculture department, who showed us the ropes, highlighting the Student Managed Farm, the Centre for Sustainable Information and some of their recent research projects.

The Student Managed Farm runs some of the latest and greatest New Holland equipment on roughly 1700 acres of land. It began over 20 years ago, and besides increasing enrolment in agriculture, has proven its success by its growth; roughly five years ago, the college introduced a livestock component, developed using much of the crop technology model. It offers managerial roles to second-year students keen to try their hand at leadership, through an elaborate and formal interview process and encourages students to step out of their comfort zones.

The Centre for Sustainable Information was opened in May of 2012 and celebrates a net-zero energy use. It’s powered, heated and cooled by an assortment of renewable energy technologies, including: 6 geothermal boreholes, fixed and tracking solar array systems, a wind turbine and solar hot water collectors. Besides 10-.5″ walls it totes superinsulation, heat recovery ventilation, energy efficient windows and energy efficient lights.

Biochar and biogas resulting from waste agriculture are currently hot on Lakeland’s radar. Plots at Lakeland now are looking at the overall impact of biochar on soil and with Alberta Innovates Technology Futures, the college is working with two portable biochar units.

Another example of research is the looking at cropping Jerusalum artichokes, which are valuable in the production of inulin. Inulin is a carbohydrate made up of fructose polymers. When consumed, inulin is not digested in the stomach, but the intestines, making it valuable to the bacteria there.

Back onto the bus and onward! We were met at The Cheesiry by Rhonda Headon, who first learned to make cheese in Italy and though she joked about making it in Canada, had no idea she’d make her dream a reality. Today, the operation uses milk from 100 sheep, resulting in high quality cheeses like pecorino, fresco and la bianca, as well as yogurt and feta.

Elk Valley Ranches, located south of Kitscoty, Alberta, was established in 1985 with 15 elk and 10 bison. The farm has evolved incredibly quickly, now with roughly 400 bison females, a custom-feeding lot, trophy elk for contract and elk velvet for market.

Frank McAllister, one of the the farm’s founders was on hand to tell us about his about his operation. We stepped into the shop, with the smell of recently-cut metal lingering in the air, the tools neatly arranged on shelves and organized in boxes and three enormous trophy racks on display.

Take a seat on a saddle, at Edgerton’s Ribstone Creek Brewery, and try not to adore the simple arrangement of keg-made-tables, old-fashioned jugs and art with gentle humor. It’s a great local story, of a group of men who decided to try making beer, and in 2012, after re-modelling the building they now occupy, doing extensive market research and developing a recipe, they began full-scale production of craft ale and lager. 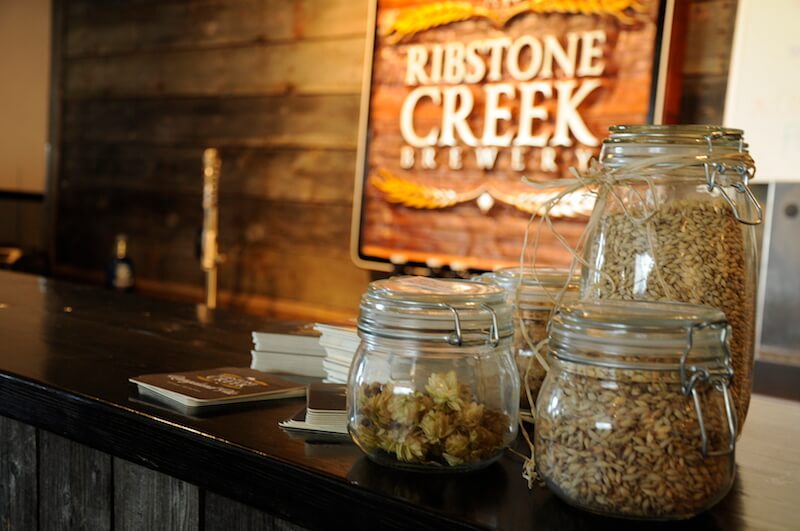 A delicate meal amongst a sea of construction, our last stop was perhaps my favourite. Built in 1929 after a massive fire destroyed its predecessor, the Wainwright Hotel is currently undergoing massive renovations to become Buffalo Park Centre. The renovation will expand the building’s lifespan and provide the public with the opportunity to learn of its history with a heritage gallery, enrichment centre, exhibit, archives and a reading room.