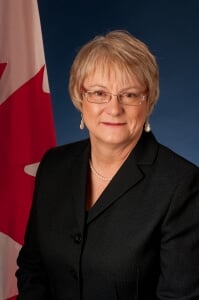 JoAnne Buth has been named as the new CEO of Cigi (the Canadian International Grains Institute). She takes over from Earl Geddes who is retiring on September 8, 2014.

Buth is well known in the domestic and international grain industry, having spent most of her professional life in agriculture. She was with the Canola Council of Canada, serving as Vice President from 1999 to 2007 and President from 2007 to 2012. Buth has also served on many agriculture advisory committees in both private industry and government. She was appointed to the Canadian Senate in January 2012 where her extensive knowledge of agriculture was a strong attribute.

Buth says joining Cigi enables her to return to her roots. “This opportunity represents coming home to me as I come back to work in an industry that is so critical to Canada and to Canada’s reputation internationally. Cigi is a gem in the agriculture industry and I am very excited to be leading an organization that is in a growth phase.”

About Cigi: Cigi is an independent market development institute created in 1972 (click here for the website). Cigi’s mission is to create a global advantage for Canadian field crops through the delivery of technical expertise, support and customized training to the domestic industry and customers around the world. Cigi is funded by farmers, the Government of Canada (AAFC) and industry partners.