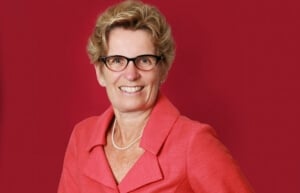 Ontarians are waking up to a rather red province, as Kathleen Wynne’s Liberals won 59 ridings on their way to a majority mandate.

Those taking a closer look at the map, though, will notice that swath of crimson is largely in one area: Toronto. This concentration of Liberal MPPs is not unexpected of course (though the majority mandate did take more than a few pundits by surprise), but it does beg the question — if Premier Wynne isn’t going to remain on as ag minister, who will she name to the role?

Most rural counties elected Progressive Conservative MPPs, leaving the choices limited. When Wynne announced she would pick up the agriculture portfolio, she alluded to it being a short term role. In her time as ag minister, many in agriculture have felt she didn’t give the sector the time or attention it deserved, when balanced with her duties as premier.

What do you think? Will Wynne stay on as ag minister? If not, who should take her place?