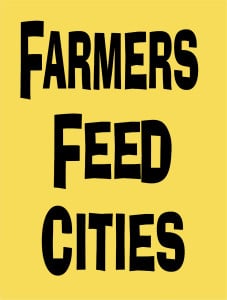 If you have any Farmers Feed Cities memorabilia hanging around, treat it with respect. As of Monday, it became collectible.

Just as the first ever Local Food Week was getting underway in Ontario, Farmers Feed Cities, one of the most successful agriculture awareness programs in recent memory, wound down.

The Grain Farmers of Ontario (GFO), which in a previous incarnation helped get the campaign off the ground nearly 10 years ago then officially took ownership of it when GFO formed in 2008, say it needs a new campaign, one that is more aligned with its particular interests.

In that light, on Monday as Farmers Feed Cities was being phased out, GFO introduced Good in Every Grain, which the organization calls it a “badge of pride” for its 28,000 members (including new grain farmers, for whom the campaign’s website has a special section).

“It speaks to the good values farmers represent, the good work they do for the environment and their communities, and the good quality grain crops they grow,” says CEO Barry Senft.

I get it, and I don’t blame GFO a bit. It’s not responsible for all commodities. Grain farmers need to do their own thing.

“Farmers Feed Cities was well embraced by the agricultural community, from grain farming to horticulture to livestock, and everything in-between,” she says.  “Now that Grain Farmers of Ontario is a well-established organization, the time is right to launch a dedicated campaign for the province’s corn, soybean, and wheat farmers that speaks specifically to the good work they do and the good crops they grow.”

I get it, and I don’t blame GFO a bit. It’s not responsible for all commodities. Grain farmers need to do their own thing.

And besides, I believe it’s time to say goodbye to Farmers Feed Cities, a campaign from another era.

Here’s why. Farmers Feed Cities was hatched when farmers were exceptionally angry. They felt misunderstood by the public, disrespected by decision makers and, from their perspective, ignored by governments.

In reality, they were anything but ignored by governments, which had repeatedly come to their aid when chronic low prices were nagging the grain sector in particular. And as farmers, they had among the most respect of any profession. Still do.

But those stubborn low prices, dragged down in part by warring export and production subsidies given by the USA and EU to their farmers, were driving them nuts. They had no control over the depressed world prices. Diplomatic measures weren’t helping resolve the price impasse. So armed with a you-need-us message, they appealed to the public for moral support.

They launched high-profile events, especially tractor parades at Queen’s Park. On the down side, that alienated some farmers who thought it made them look like they were begging for money and couldn’t exist without government support.

But overall the campaign was a hit, especially with the public. Farmers Feed Cities’ arrival coincided with consumers’ ballooning interest in local food. Supporting farmers was considered cool, as was recognizing their contributions. Farmers Feed Cities stickers, T-shirts and posters were everywhere. Even my band, the GMOs, was caught up in the spirit, writing a protest song called Farmers Feed Cities, and playing it at many ag events.

But when grain prices started rising — and kept rising — and farm incomes reached record levels, the angry farmer image lost its lustre. Negativity diminished. Farmers needed a new approach. They rebranded Farmers Feed Cities in 2010, with a focus on consumer education, the shape of things to come for the ag sector.

However, by that point, the end was in sight for Farmers Feed Cities, at least as far as grain farmers were concerned.

“While successfully creating awareness about Ontario’s diverse agriculture sector, grains were lost in the conversation, meaning neither consumers nor the industry recognized the link from the campaign to its sole sponsor—Grain Farmers of Ontario,” says the organization.

So now it’s onto Good in Every Grain – less emotional for sure, but more fitting for the times.

That said, farmers still feed cities. They shouldn’t let people forget it, regardless of the campaign of the day.

One thought on “The sun sets on Farmers Feed Cities”