Listen to this week’s market wrap-up on Soundcloud: 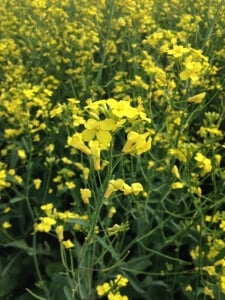 Grains are mostly lower this week as the market chews through a bearish report from the USDA on Friday, July 11th. The only place you would’ve seen bulls roaming around was at the Calgary Stampede, I’m afraid. Managed money continues to be net sold of all grains, except for corn, surprisingly, as it’s been suggested that unless average U.S. corn yields hit 170 bushels an acre, prices are justifying current estimates of supply and demand. Most analysts are forecasting corn and soybean prices-per-bushel to be around $3.75-$4.00 and $10.50-$11.00 respectively in the last three months of 2014. Oil World recently raised their E.U. rapeseed production forecast to 22.7 million tonnes, a new record as acreage and yields are both seen increasing year-over-year. Globally, the firm sees total production coming in at 68.3 million tonnes, which is technically a drop of two percent from last year but the drop is mostly attributed to Canada only producing an estimated 14.8 million tonnes (P.S. this would still be the second largest crop on record following last year’s monster of 18 million tonnes). Is this bullish? Considering record soybean production and a well-above-average canola carryout in Western Canada from 2013/14, and it’s hard to rationalize higher prices just yet.

Equity and commodity markets (especially wheat), however, spiked on Thursday, July 17th as news that a Malaysian airplane was shot down by a missile over battle-weary areas in eastern Ukraine, killing all 298 civilian passengers. It’s still unclear who shot down the plane, whether it be Ukrainian separatists, actual Russian forces (as the plane was 50 km from the Ukrainian-Russian border), or even Ukrainian military. Adding to the geopolitical risk was Israel going on the ground offensive in Gaza, entering the Palestinian area in order to destroy tunnels Hamas is using to get into Israeli territory. Ultimately, in a bearish world, July 17th was an opportunity to lock some sales in. Nonetheless, things could stay elevated for a bit in the wheat market given the Black Sea’s wheat production and export prominence and things being on edge in the Middle East.

Grain movement across Canada continues to chug along, most evidenced recently by CP Rail’s third-quarter grain movement revenues increasing by 32 per cent year-over-year (Oh, plus they made $371 million in the quarter. Yes, that’s profit, not gross revenue). Last month, Thunder Bay had its busiest June in 17 years as the port moved 965,000 tonnes of grain while the St. Lawrence Seaway has increased their grain shipments by 50 per cent year-over-year to 2.7 million tonnes so far this season (end of March thru to end of June). Here on the Canadian Prairies, estimates of unseeded and flooded acre losses continue to build, mostly in western Manitoba. Forecasts range from four million acres total to nine million acres, but I’ll peg it around the five million-acre level. All the aforementioned in mind, now’s a good of time as ever to be re-evaluating your marketing strategy, given what you have in the bin, what it’s looking like in the field, and what your cash needs will be like over the next six-to-twelve months.