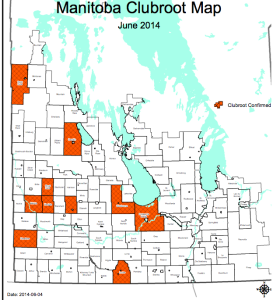 Up until now, the Manitoba government has remained mum on the whereabouts of three canola fields that showed signs of clubroot infection in 2013.

Farmers and agronomists had asked for more information regarding positive pathogen finds in order to better fine-tune best management avoidance practices. Today, Manitoba Agriculture Food and Rural Development released a map showing all ten municipalities that have tested positive for the pathogen’s presence in soils.

Because only 2% of the farmland in the province has been sampled to date, MAFRD adds that farmers should operate under the assumption that clubroot is within their area, even if they live outside of the marked municipalities.

For tips on scouting for and avoiding this devastating disease of canola, click here.