Whether it’s the drop in commodity prices or the pace at which machinery sheds have been restocked in the past three years, global machinery sales have slowed considerably.

On Deere & Co earnings call this week the company stated,

For fiscal 2014, the company expects sales to decrease 6%, and to be down ~8% for the fourth quarter compared with the year-ago periods.

According to the Association of Equipment Manufacturers, Canadian tractor sales declined in July 2014.  AEM’s monthly flash report stated,  total farm tractor sales were down 5.9% from July 2013.  For the seven months in 2014, a total of 15,560 tractors were sold which compares to 15,708 sold thru July 2013, or a 0.9% decline year to date.  The staggering drop has transpired in Canadian combine sales.  In Canada combine sales were down 39.4% for the month. Sales of combines for the first seven months have declined 28.5% over the same period in 2013.

According to the AEM, US sales of all tractors for July 2014, were up 6% compared to the same month last year, while being up 3% on the year to date, year over year.  When you dive deeper into the US numbers though, year to date combine sales are down 15% and 4WD tractors are down 11%.

With the strong soybean and corn crops forecasted in the United States putting pressure on commodity prices, farmers will enjoy busting bins and towering grain piles but will they have the cash flow to buy new iron? 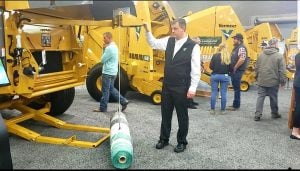 Vermeer's 604R classic and signature balers are familiar to many, but in late 2019, the company added a premium baler to the series, which adds more options and benefits to the baler. Josh Vrieze, product manager with Vermeer, was on hand at the 2020 National Farm Machinery Show to talk about the added features. "The…Read more »