One of the few Latin American countries to expand agricultural production since the mid-1900s, Brazil’s deforestation has long been in the limelight of global scrutiny. The vast topographical change is concerning, but with the agricultural industry so important to the Brazilian economy, it’s easy to see there are incredible economic incentives fuelling the destruction. 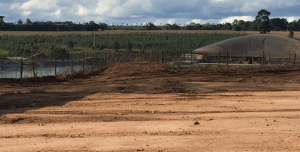 Commodities grown in Brazil vary from coffee to soybeans, wheat and rice to sugarcane and cocoa. It’s difficult for Canadians to imagine harvesting three crops per year, but that’s very much the norm in Brazil.

This year, Rob Saik, host of Agri-Treks and founder of Agri-Trend, visited Brazil, and in this video, tours a 2000 hectare, zero-tillage farm near the subtropical city of Ponta Grossa. The farm hosts an impressive assortment of machinery and technology, including an on-farm biodigester. Have a look:

Grasslands, rainforests, and soybeans: A trip to Brazil with Rob Stone