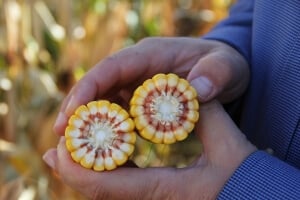 Grain and oilseed prices through the middle of August continue to be depressed by anticipation of a bigger harvest. Specifically, on Tuesday, August 12th we got this month’s version of the USDA’s WASDE report which came in somewhat bullish corn, despite production still being pegged at over 14 billion bushels.

Corn prices were supported by the USDA’s forecast for the national yield average to be 167.4 bu/ac, not the 170+ that the market was expecting. As a result, the 2014/15 ending stocks for corn dropped as production was below expectations and demand was increased slightly, thanks to feed, ethanol, and exports. More than a few market participants are questioning the yield numbers, though, as they suggest that the USDA is underestimating ear weights (i.e. average weight and number of kernels per ear). This rationale comes from the ideal growing conditions, and when matched up against 2004’s record ear weight of 0.351 lbs per, the average yield would jump up to 179.3 bu/ac (that’s a really big bearish number). Keep in mind though that the crop is behind schedule in a few major areas, which could adversely affect ear weight as the nights grow colder.

As for soybeans, average yield is seen by the USDA as 45.4 bushels per acre, slightly above expectations, leading to a higher carryout in 14/15 of 430 million bushels and general bearish outlook. Food for thought: the last time soybean carryout was above 400 million bushels was in August of 2006 and futures were trading at $5.70 per bushel. Soybean production was left unchanged by the USDA in Argentina and Brazil at 54M tonnes and 91M tonnes (a record!) respectively. C.N.G.O.I.C. see China’s soybean imports rising four per cent year-over-year in 2014/15 to 73 million tonnes, matching the U.S.D.A.’s most recent estimate. This is down though from the 17 per cent growth rate experienced in 2013/14 from the year previous due to larger domestic supply. Ultimately, the oilseed complex continues to be weighed down by big production and large carryout.

While the WASDE report didn’t really shock things too much in the aggregate, a few days later, on Friday, August 15th, one of the USDA’s arms, the FSA, published its acreage numbers which in turn were much lower than the USDA’s (read: bullish). The report showed that 83.32 million acres of corn, 79.25 million acres of soybeans, and 52.57 million acres of wheat had been enrolled in government subsidy programs. Further, with a record yield and corresponding harvest looming, it’s very likely this is just a short-term move. On the flipside of acreage numbers, F.S.A. is suggested that 1.54 million acres of corn are being considered as prevent plant (PP), while the PP number for soybeans and wheat is 827,000 acres and 1.36 million acres respectively. As mentioned, these numbers are well below the official U.S.D.A. forecasts and certainly caused a jolt in the market briefly but the data is preliminary and will surely play catch up closer to where the USDA’s at come September.

On the geopolitical front, Russia continues to be the bull in the china shop as they are looking to provide “humanitarian aid” to Ukraine but are entering the country through pro-Russian separatists’ controlled border crossings. Intuitively, what sort of “aid” Russia is supplying is big question mark. Heading south, the situation in Iraq continues to escalate as the I.S.I.S. militant group have taken over five oil fields, Iraq’s biggest damn, and now large areas in five of Iraq’s largest wheat producing regions, or where about 40 per cent of Iraq’s wheat is grown. The militant group is now milling the wheat stored in government silos and the Iraqi government is reporting that the group is actually trying to sell the wheat back to the state (likely in order to finance their war-mongering ways!). Iraq’s trade ministry says they’ve bought about 1.1 million tonnes of wheat from farmers in the occupied region (or about 20 per cent of annual Iraqi consumption) but it’s estimated that 400,000 farmers who delivered their wheat, won’t get paid now while living under the militants’ occupation. As such, there will certainly be a cash crunch when it comes to these same farmers trying to put in a crop for the 2015 harvest! While Iraq’s grain board says the country has enough wheat to last until March 15th, the Middle Eastern country usually imports about half of their consumption needs and this year, it looks like they’ll be a full-on net importer.

Overall, geopolitical risk continues to provide a little premium in the market but the North American harvest is starting to ramp up and it looks big. The WASDE. brought a little of everything but nothing to move the market too much. In my opinion, depending where market prices end the month of August for corn, soybeans, and wheat, the game won’t heat up too much after that as it could be where we find ourselves see-sawing around over the next year, even two.

Motorcycles, crush or feed, and wheat at a “social”— LIVE! with Brian Voth

Grains weaken as July ends — This week in the grain markets