I’ve often heard travelling farmers suggest their peers ignore the customs declaration form that asks whether or not you’ve recently visited a farm or are returning to one. The fear, is, of course, that the customs staff might waste your time with needless questions, disinfecting of boots and so forth. I’ve never paid much heed to that advice, however, partly because I find lying to be a far greater hassle than telling the truth, and partly because I don’t want to be the traveler who comes home to Canadian agriculture with a foreign threat in tow.

Whether you are visiting a farm abroad or at home, you have a role to play in helping to keep Canada’s animals healthy. Visiting a farm in another country might seem like a harmless activity, but it could expose you to diseases or pests that could pose a threat to you and your family’s health, your animals and wild animals, the environment, farmers’; and producers’; incomes and the economy.
– BioSecurity at the Border, Canadian Food Inspection Agency (CFIA)

On my way home to Canada from Australia last year, I ticked the box to notify customs I was in fact traveling from farms to farms. Upon landing, I was briefly questioned about my work, my travel, my declarations. I was then asked to line up for separate screening, unlike most of my peers on the same flight.

I was proud. I had done the right thing. Even though I knew my family was anxiously waiting on the other side of those doors, I walked through the long line without regret. Once I arrived to speak to the man in charge, I was asked to flip up my heels and display the bottom of my boots. A four-second visual inspection of their cleanliness and I was allowed to resume my travels.

Last week, when I arrived from Scotland, I did the same: I checked the box. This time, I wasn’t even asked to travel a 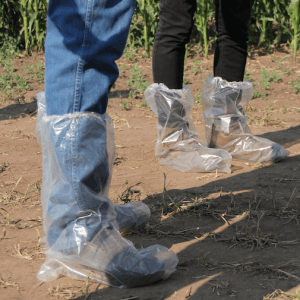 “You were on farms?”

“Are your boots clean?”

An unimpressed scowl and muttering.

“Is there soil or cow crap or anything on them?”

And that was that. Another visual inspection, this time done purely by me. No questions of what kinds of farms we had visited. No suggestions around how I should wash and disinfect my clothes and footwear. Nothing.

Perhaps the Canadian Border Services Agency feels biosecurity threats from Scotland, England and Australia are minimal. Perhaps they were harsher in the days when foot-and-mouth disease got front-page attention from mainstream media, or when avian flu was in the headlines.

Still, I’m glad I took precautions. Between indoor meetings and travel, I was away from foreign farms for days before entering Canada, and was able to wash the clothing I had worn abroad before mucking around in any farms in Canada. I wore separate footwear, and thoroughly disinfected what I took with me. Yet, I worry still, which is good, I think. It means I’m careful. It means I’ll exercise increased caution and awareness when I travel again. It means I’m doing my best. What terrifies me, however, is those who haven’t grown up on a farm, or simply don’t understand the risk of travel between them. We are not providing sufficient information about the importance of biosecurity, and, in my experience, neither is Canadian Border Patrol.

For information and suggestions on what you can do on your farm to increase biosecurity, check out the CFIA’s National Biosecurity Standards and Biosecurity Principles.

Observations on a Rainy Day in Scotland