The proposal was submitted by Harriett Crosby of Maryland. The proposal cites Goss’ Wilt, Agent Orange, Bt-resistant rootworms and gluten-intolerance induced by glyphosate as some of the reasons to eliminate GMOs.

The National Center for Public Policy Research (NCPPR), a non-partisan, free-market, independent conservative think tank, recommended and in fact “urged” General Mills investors to vote against the shareholder proposal. And in the Notice of 2014 Annual Meeting of Stockholders and Proxy Statement, General Mills’ Board of Directors also unanimously recommended a no vote.

Justin Danhof, a project director with NCPPR, said in a release that General Mills’ shareholders could send a strong message “to self-appointed food police.” He further urged voters to reject the proposal, calling it “junk science.”

“The scientific debate regarding GMOs is over and the radical activists have lost. The science is settled – GMOs are safe.”

And the shareholders agreed with the Board of Directors and the NCPPR’s recommendation — over 97% voted against the proposal.

“Today’s meeting shows that fact-based scientific consensus can trump emotional appeals that are not tethered to science or reason,” said Danhof. “Anti-GMO leaders have done a good job of scaring many Americans into thinking GMOs are harmful just by saying so. But the overwhelming body of scientific evidence proves them wrong.”

General Mills CEO Ken Powell said the company stands behind the research showing GMOs are safe, but that he recognizes some consumers prefer to buy organic or non-GMO.

The company announced in January a move to non-GMO original Cheerios and supports federally mandated labelling. 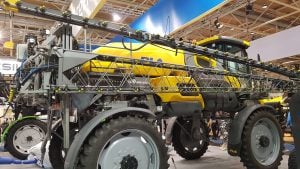 Deere & Company has announced a deal to acquire PLA, an Argentina-based company that manufactures sprayers, planters and specialty equipment for agriculture. Financial terms of the agreement were not disclosed. "The PLA acquisition enhances John Deere's commitment to customers as we continue to provide innovative, cost-effective equipment, technology, and services to improve their productivity," said John…Read more »

And the 2017 Canadian Young Speakers for Agriculture winners are…