The U.S. is running out of options if it wants to avoid facing retaliatory trade action from Canada in response to its country of origin labeling (COOL) rules.

Canada could have permission from the World Trade Organization to implement retaliatory tariffs by this time next year if the American government doesn’t make changes to COOL to reduce its discrimination against Canadian cattle and pigs. Canada published a list over a year ago outlining U.S. products that could face high tariffs if COOL continues to violate the American’s international trade obligations. 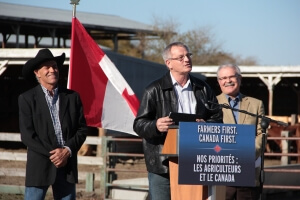 The Canadian government and livestock industry officials say COOL has cost cattle and hog producers billions of dollars since it was implemented in 2008. So would Ottawa consider compensating livestock producers using the proceeds of the additional tariffs?

“It goes into the government’s coffers, but it’s then up to the government to decide, working with industry. Can something be done that’s trade-compliant? It’s hard to flow that money back through without it being seen as a subsidy, but there are ways it can be addressed,” said Agriculture Minister Gerry Ritz, speaking in Saskatoon on Monday. “There’s a lot of work being done with not farrowing in crates and maybe there are things government can do. We’ll look at all of that, should the time arise.”

Jurgen Preugschas, the past-chair of the Canadian Pork Council, says he’d like to see producers reimbursed for the damages caused by COOL.

Balancing that out, Preugschas says the hog industry doesn’t want to risk the possibility of countervail.

“We’d have to figure out a way that that can be done, and that would be work with government, if it’s possible at all. We would much rather have the problem get solved, and never get to that question,” he explains.

If the U.S. doesn’t make changes to COOL, Preugschas and other livestock industry representatives say the retaliatory sanctions could be implemented by the fall of 2015.

Variety choice and planting dates are two key factors that drive soybean yield. On this episode of RealAgriculture's Soybean School, host Bernard Tobin asks whether later-maturing soy varieties are required for the highest yields and whether growers should plant soybeans before corn. For some answers, Tobin is joined by Michigan State University soybean educator Mike…